The idea behind SHS actually goes beyond selfish behaviours that drive people to cooperate. 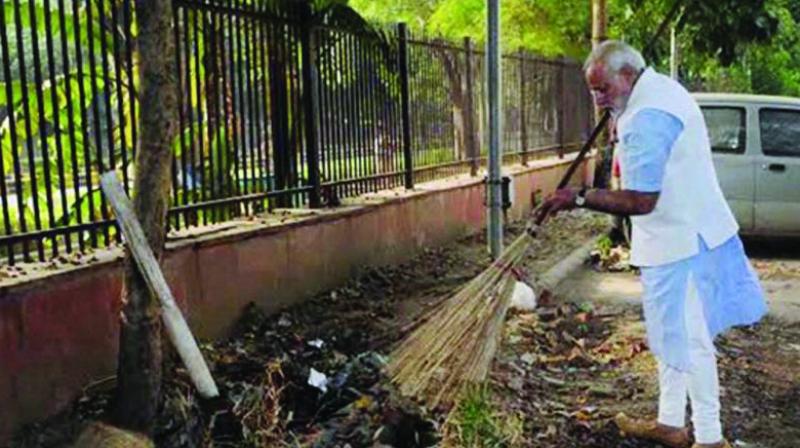 Launched by President Ram Nath Kovind from a village in Kanpur on September 15th, the cleanliness drive called Swachhta Hi Sewa (SHS) is being observed nationwide. It will continue till October 2nd to mark the 3rd anniversary of Swachchh Bharat Abhiyan (Clean India Mission) and the 150th birth anniversary of Mahatma Gandhi. PM Modi first spoke about this drive in his last monthly radio programme, Mann Ki Baat. After its launch, many celebrities have joined this campaign. Images of celebrities wielding broom and clearing garbage may be symbolic but these images do generate the right mood and momentum among the public.

Simple as it may sound, SHS is actually a very powerful concept, so powerful that there is hardly any opposition to it. SHS highlights several things: one, the cleanliness drive has to become a mass movement if it is to reach each community and each neighbourhood; it can’t be achieved by the government alone. As PM Modi rightly notes that cleanliness has to become everybody’s business for it to succeed. Two, cleanliness is not a halfway house; if some people participate and others don’t, it will remain unsuccessful. The health benefits associated with cleanliness and public hygiene cannot be secured if most people do not cooperate. Three, cleanliness is not just a one-time act but a way of life, a way of thinking that produces desired behaviours to have a lasting impact. Clean your surroundings by all means but also ensure that those don’t get dirtied again and again.

The idea behind SHS actually goes beyond selfish behaviours that drive people to cooperate. It is actually about each individual contributing towards a social responsibility. It is about rising above one’s narrow self-interest to positively investing in society. According to PM Modi, it is about shramdaan — putting in a few hours of social service; it is about volunteerism. He has called upon all individuals and institutions/organisation to partake in it. And PM Modi’s view, this is the best tribute that one can give to the Mahatma on the eve of his birthday.

The concept at its core
Every individual — regardless of age, class, caste, sex, religion, place — has something to contribute to the society. We all spend considerable time serving our personal interests, which is fine, but we must take some time off to partake in our societal responsibilities too. Each individual needs to contribute, howsoever small, for the larger good of the society. This self-less contribution could take the form of time, money or effort. If every individual contributes towards the society, the nation gains by several multiples of their collective contributions. This is the core concept that is so well captured in the SHS campaign. Cleanliness is just one application of this concept that actually has relevance in wide variety of contexts.

Talking about one’s contributing to the society, there are innumerable ways of doing it. In the recent flooding of Kerala, for example, people from all walks of life extended a helping hand for the rescue and now for the rehabilitation of the affected families. Stories abound in social media of how good Samaritans helped the Keralites in a variety of ways. It is all about empathising with fellow beings who may be negotiating a difficult turn in their lives or trying hard to stand on their feet after being hit by the vicissitudes of life. And if we could help them in their hour of need, it is so much better. The underlying philosophy being giving more than taking from the society.

It’s relevance in current context
This core concept assumes added significance in our society at a time when many people are conducting themselves in ways that run counter to this concept. For example, there are many people who have enriched themselves, filled their pockets, by inflicting a huge damage on the nation. Names of a few such high-profile business people who are currently absconding from the country appear in the news every other day. And these are just a few names in the long list of people who have swindled public money. Typically, the collateral damage is much more than the money swindled. It is hardly of any good, if such people do a little bit of charity or occasionally partake in societal responsibilities.

Such people are not just taking more than giving back to the society. They are actually hurting the society, doing a great disservice to the nation. Such people are well-advised to reflect on, Swachhta Hi Sewa, which actually has a much deeper meaning!

The author is a development economist, formerly with the Bill & Melinda Gates Foundation and the World Bank.