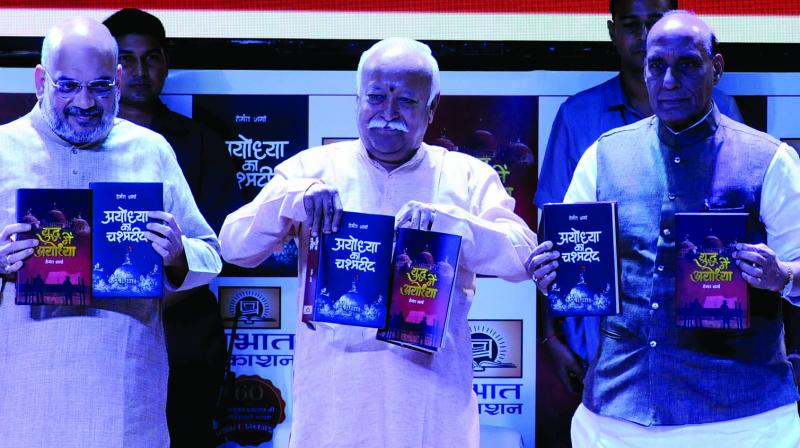 RSS chief Mohan Bhagwat with BJP president Amit Shah and Union home minister Rajnath Singh at the launch of a book on Ayodhya in New Delhi on Thursday. (Photo:G.N. JHA)

New Delhi: The Congress on Wednesday attacked the RSS over its chief Mohan Bhagwat’s statement. Mr. Bhagwat on Tuesday strongly pitched for the construction of a Ram temple in Ayodhya at “the earliest”.

Congress spokesperson Manish Tewari said, “When elections come, they remember the Ram mandir.” Mr. Tewari also claimed that if a time line is drawn of statements made by the BJP and RSS leadership on the Ram temple from 1986-2018, one will find that they were made when an election was near.

The RSS had organised a three-day lectures series that ended on Wednesday in the national capital. During the event RSS chief Mr. Bhagwat spoke on a range of issues. He said, “Everyone who lives in India is Hindu by identity, nationality,” adding that ‘Hindutva’ means inclusiveness. “Hindu Rashtra does not mean it has no place for Muslims. The day it is said that Muslims are unwanted here, the concept of Hindutva will cease to exist,” he added.

The views of the Rashtriya Swayamsevak Sangh on Article 370 and Ram temple may not have changed, but its views on Article 377 have, Mr. Tewari said, in an apparent jibe at Mr. Bhagwat’s comments in which he said the LGBTQ community should not be isolated as they were also part of society. Mr. Tewari further asserted that the DNA of an organisation or a person cannot be changed.

On the three-day RSS conclave, he said every organisation has a right to put forward its views. Asked about Mr. Bhag-wat’s remarks on identity of Indians, Mr Tewari said,  “There is no contradiction between a national, religious or even a sub-nationalistic entity. I am a proud Indian.

I am a Hindu and I am a Punjabi at the same time. There is no contradiction between them.”