If NEET continued for a few more years, the health care system of Tamil Nadu would be very badly affected 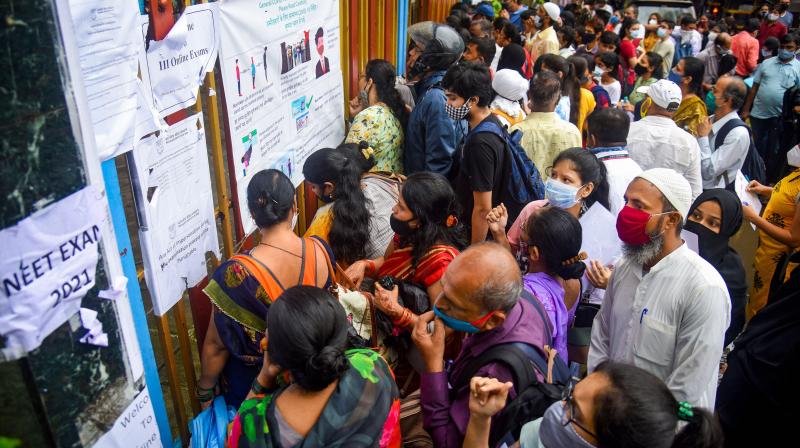 Students with their parents, arrive to appear for NEET exam at Thakur College at Kandivali, in Mumbai. (PTI Photo)

Chennai: If NEET (National Eligibility and Entrance Test) continued for a few more years, the health care system of Tamil Nadu would be very badly affected and there may not be enough doctors to work in Public Health Centres (PHCs) and no specialists in Government Hospitals, the nine-member high-level committee, set up to ‘study the impact of NEET on medical admissions’, said.

The 165-page report of the committee led by former High Court judge A K Rajan, which was released on Monday, expressed the fear that NEET might lead to a situation in which the rural and urban poor might not be able to join medical courses and made a startling statement that it did not promote merit.

Tamil Nadu might also be pushed back to the pre-Independent days when only barefoot doctors were catering to the needs of people in small towns and villages, thereby pulling down the State in the rank list for medical and health care system in the country, the report cautioned.

Private colleges that charged up to Rs 30 lakh fees a year were admitting students with average scores or even just pass, which was less than 20 per cent marks, and thus enabled students from rich homes to become doctors, the report made it clear.

Thus, it did not help realize the objective of ushering in merit in private medical college admission by the Parliamentary Standing Committee that went into the issue, the report said, alleging that NEET was forcefully implemented in Tamil Nadu though the recommendation of it to allow the States have a choice.

Making it clear that NEET could not be made compulsory under the Dr MGR Medical University Act, the report pointed out that higher education was a State subject and that NEET was opposed to the federal structure.

Recommending the total elimination of NEET in the State and making the marks obtained in the Higher Secondary examination as the sole criterion for medical admissions, the committee also urged the government to address some issues relating to the state of higher secondary school education in the State.

Socio, economic and other demographic adversities that cause poor performance of all relevant students, mainly the disadvantages and underprivileged in Higher Secondary education should be identified and re-profiling of scores should be done through a pre-developed framework of ‘adversity score,’ the report said.

It recommended the reforming of education to fostering ‘learning’ and not ‘coaching’ as it was being done now and the tweaking of curriculum, teaching, learning and learning assessment to enable and empower students with subject knowledge and higher-order skills including reasoning, decision making and social disposition.

The committee was for the elimination of the rote form of learning assessment that engenders coaching without focusing on knowledge and skills in school education.

Referring to a plethora of court judgments, the report made certain remarks like NEET had clearly undermined the societal representation in MBBS and higher medical students favouring the affluent segment of society and thwarting the dreams of underprivileged.

Going into the role of private coaching centres in preparing students for NEET, the committee has come out with adverse findings, besides stating the repeaters had gained admissions.