A group of youths raised slogans against the district administration claiming that some people were still missing. 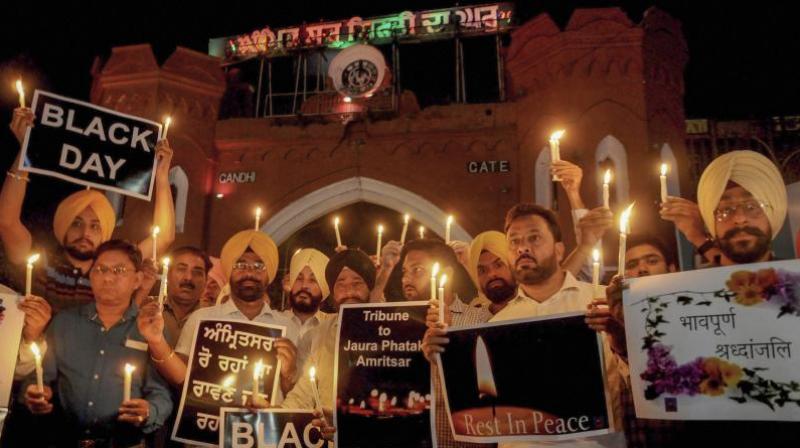 The protesters raised slogans against the district administration and vent their ire against the railways for not slowing down the train. (Photo: PTI)

Amritsar: A group of youths held protests on Sunday morning near the Amritsar mishap site where at least 59 Dussehra revellers were mowed down by a speeding train.

They raised slogans against the district administration claiming that some people were still missing. The protesters demanded that the missing person be traced and also adequate compensation be given to the families of the victims.

"Two labourers who were living in my area are still missing," said Kamal, who is a resident of an area near Joda Phatak where at least 59 people were killed Friday evening after a Dussehra gathering watching the burning of a Ravana effigy was run over by a train.

Kamal raised apprehensions that the death toll could be higher than the figure given by the government.

On Saturday, after visiting the accident site and the hospitals where the injured were admitted, Chief Minister Amarinder Singh had said 59 people were killed and 57 injured. Sub-divisional magistrate Rajesh Sharma, however, said 61 people lost their lives.

At the Sunday protest, another local, named Raju, said a man was still looking for the body of his father who died in the incident.

"He had gone to collect a piece of cloth to cover the body of his father, but when he returned he could not find the body," said Raju.

Another local, Ram Kumar, claimed that four members of Kajal's family, who are vegetable-sellers, are missing.

Anju, whose brothers Vikas and Ninderpal were killed in the incident, accused leaders of indulging in politics over this incident.

"When everybody knows that Dussehra function had been organised here for the past several years, appropriate steps should have been taken beforehand to prevent such kind of tragedy," she said.

Another man was inconsolable. He could just find the slippers of his brother Sonu. He carried the slippers to the police station prayed them to help him find his missing brother.

The protesters raised slogans against the district administration and vent their ire against the railways for not slowing down the train.

At least 300 people were watching the 'Ravana dahan' at a ground adjacent to railway tracks when the train struck.