India   All India  21 Oct 2018  Railways: No nod sought for event, tragedy not our fault
India, All India

Railways: No nod sought for event, tragedy not our fault

Toll rises to 59, railways rules out punitive action against driver. 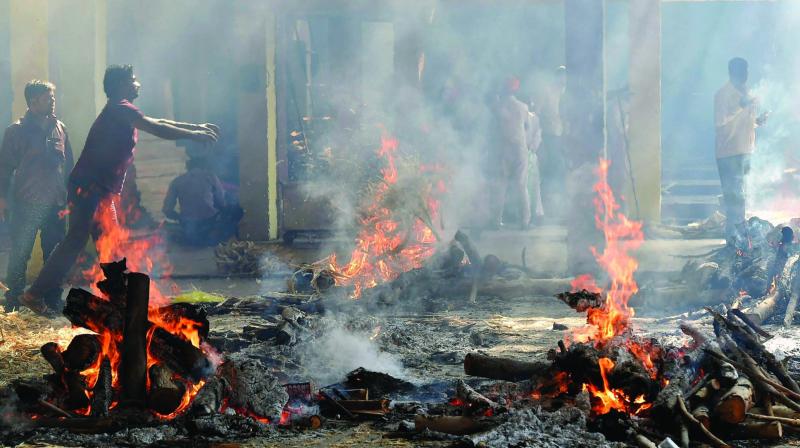 Amritsar: Funeral pyres were lit in batches at Amritsar’s cremation grounds on Saturday for 39 of those killed when a train from Jalandhar tore through people standing on the tracks for a better view of Ravana going up in flames on Dussehra, Friday.

The accident, which has claimed 59 lives so far, minister of state for railways Manoj Sinha was not due to the negligence of the national transporter, and ruled out any punitive action against the driver of the train.

“The incident was not a railways’ fault. There was no lapse on our part and no action against the driver will be initiated. People should refrain from organising such events near tracks in future. I think if precaution had been taken, the accident could have been averted,” Mr Sinha said, and added that drivers are given specific instructions on where to slow down the train. “There was a curve. The driver couldn’t have seen it. What should we order an inquiry about? Trains travel in speed only,” he said Sinha, adding wherever such events are held, the district administration concerned gives permission.

But a blame-game has already begun.

While the Government Railway Police (GRP) has registered an FIR against “unknown persons”, Punjab chief minister Amarinder Singh has announced a magisterial inquiry which will submit its report within four weeks.

Mr Singh said that the magisterial inquiry’s report will state who was at fault. The divisional commissioner of Jalandhar has been entrusted with the job of holding the inquiry, he said.

A statutory inquiry by the Commission of Railway Safety, which works under the administrative control of the ministry of civil aviation, will also be conducted as per the laid down norms.

Amritsar deputy commissioner of police Amrik Singh Powar said the organisers were given a “no objection certificate” from the police on the condition that they also get permission from the municipal corporation and the pollution department.

In their letter seeking the certificate, the organisers had also asked for security arrangements, citing the expected presence of Punjab minister Navjot Singh Sidhu and his wife, former MLA Navjot Kaur Sidhu, at the event. But the Amritsar Municipal Corporation distanced itself from the tragedy.

“Nobody was given permission for organising the Dussehra event. Moreover, nobody had applied for the permission with the Amritsar Municipal Corporation,” commissioner Sonali Giri said.

Railway officials said no permission was sought from them.

Railway Board chairman Ashwani Lohani, who visited the spot at midnight, said the railways was not informed about the gathering of people. “At midsections (between level crossings), trains run at their assigned speed and people are not expected to be on the tracks. At midsections, there is no railway staff posted,” he said.

On Saturday, crowds gathered outside hospitals and squatted on the tracks in protest. Tensions ran high as the police, which barricaded the area, tried chasing them away from the railway line.

Friday, said Vijay Kumar, who lost his 18-year-old son Manish, was a night of unspeakable horrors

A WhatsApp photograph of a severed head had flashed on his phone screen at 3 am, confirming his worst fears. His son was one of those killed.

His younger son Ashish returned safely, said Kumar, but the frantic search for Manish ended with that “ping” on his phone. He has since been going from hospital to hospital looking for the remains of his elder son.

A leg was found and one hand, but they are not Manish’s. “My son was wearing blue jeans. This one is not wearing blue jeans. I have lost my world,” an inconsolable Kumar said outside the Guru Nanak Hospital where most of the injured were taken. People milled around the hospital compound, some stunned into silence by the enormity of the tragedy that felled their loved ones and others holding back tears.

Some people also hurled stones at the house of Saurabh Madan Mithu, son of Congress councillor Vijay Madan, whose family had organised the event. Both have not been seen after the tragedy.

Opposition parties, including the Akali Dal, BJP and AAP, demanded strict action against those who allowed the event, harping on Navjot Kaur Sidhu’s presence on the dais.

A video clip on social media appeared to indicate that those on the dais could see people standing on the railway tracks.