‘Future tense, it will be war of technologies next’

The 21st century has seen the rise of radical Islamic terrorism and the advent of cyber security threats. 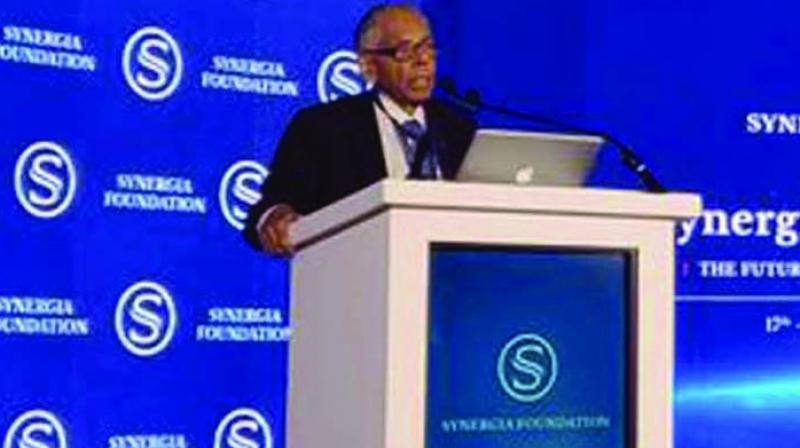 Bengaluru: The turn of the 21st century has brought with it a new range of challenges and security concerns, many of which have not been imagined throughout the history of intelligence and defence. For once, the world has seen the rise of a new brand of leadership, dramatically different from the democrats and dictators who led nations through the 1900s.

The 21st century has seen the rise of radical Islamic terrorism and the advent of cyber security threats.  Former National Security Adviser, M.K. Narayanan, who delivered the keynote address at the start of the three-day Synergia Conclave, apologized, at the outset, for turning into a "prophet of doom," for the world is changing in ways that hadn't so far been imagined, making the future that much harder to predict. The Conclave, which took place on October 17, 18 and 19 here in  Bengaluru, was arguably the foremost platform of its sort in the country, with an unparalleled gathering of intelligence, security and defense experts from around the world.

The "premature death" of liberalism and communism, says Narayanan, who has also served as the head of the Intelligence Bureau, beginning in the 1960s, has given rise to "leaders who practice a kind of personalised authoritarianism." Hitherto unforeseen innovations, in the hands of unpredictable leaders makes forecasting the future "rather difficult," he says. "Ideas and ideologies seem to be given short shrift and the vacuum is rapidly being filled by nationalism. How will this impact the future? That's purely a matter of conjecture but what is certain is that the future is likely to be startlingly different from the past."

Military strength and economic power are no longer the sole factors that dictate leadership, as IT, biotechnology, nanotechnology and cyber take on increasingly important roles, even as the threats of military conflict and nuclear war grow more unlikely, Narayanan says.

Space Wars
Military conflict might seem unlikely but that's no cause for complacence. "Space wars," says Narayanan, "have come to replace nuclear proliferation. Both China and India have joined the fray with gusto, rapidly expanding their capabilities in outer space and testing Anti SAT weapons. "Countries are capable of building satellites with lasers that can jam enemy signals and Russia is known to be experimenting with proximity operations, connected to an orbital weapons programme. The weaponisation of outer space is a now a reality."

Terror
"Existing threats from previous centuries, like terrorism, are likely to continue," says Narayanan. "They will be clothed in new garb and asymmetric threats are said to grow. Non-state actors will play a major role in these." Islamic terrorism, he says, is also unlikely to be halted any time soon. But the worst is yet to come."

Cyber Age
The leaps and bounds in technology should have made the world a better place. Instead, they have given rise to a hybrid system of warfare and security threats, "where the lines between the physical, digital and biological reams are being highly blurred." Technology, like big data, modern analytics, machine learning and quantum computing can do immense damage in the hands of an opponent, "one unrestrained by any notions of law or morality."

The monetary value of data, he points out, has surpassed that of fossil fuels and much of this data is "what we voluntarily share, including on our innermost thoughts, desires and fears." Big data, he explains, is both an enemy and a friend. "The internet, once seen as a great liberator, now precipitates cyber criminality, and has become a surveillance engine that induces users to trade privacy for entertainment and distraction."

Cyber attacks have grown more sophisticated too, targeting both operational and informational infrastructure.

Artificial Intelligence
"AI has the potential to solve the problem but it doesn't provide an all encompassing solution." Badly designed AI, believes Narayanan, can cause more harm than anything else. "Decision makers don't possess adequate knowledge of AI processes, as attackers tunnel effortlessly through digital networks, penetrating our defenses."

AI-enabled warfare, he says, will be a game-changer and "an extremely dangerous cyber arms race is already on the anvil."

Quantum Computing
"The rise of quantum computers could be even more radical." Existing cryptographic algorithms can be broken in realistic time periods. These computers will also be able to produce "hyper realistic images," making veracity a scarce resource. "Passwords are easier to crack, even biometric devices that use fingerprints, facial recognition or retinal signatures can be bypassed."

Articifial Intelligence algorithms are dangerous also because they are opaque and as they learn on their own, "learning from bad data could wreak havoc."

Where, then does that leave the future of security? "The existential challenge," says Narayanan, "that the data age poses to society will be a matter of utmost concern as the century progresses. There is a need to innovate faster, fuse traditional human skills with technological innovations with a mindset that enables diversity and empowers the people."