Trump great at a party... but unfit to be Prez: Uzi

Once a loyal supporter of Netanyahu, Arad has more recently emerged as one of his harshest critics. 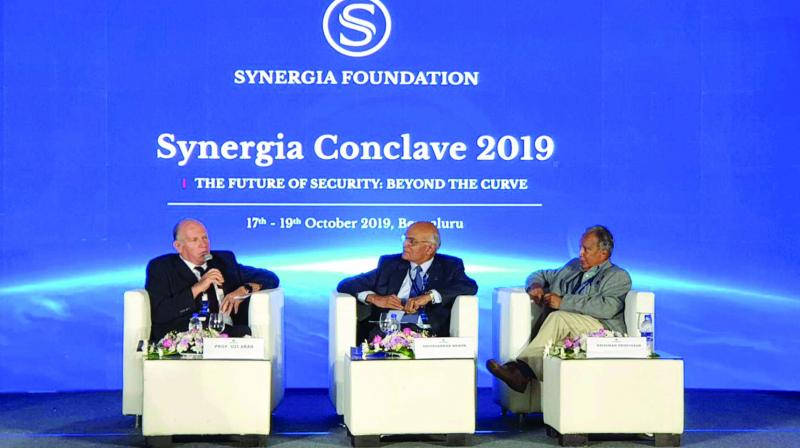 "If it wasn't sad, it would be funny." Complex problems, unprecedented leaps in science and technology that have redefined the security landscape, blurring geographical boundaries, revolutionising access to data and surveillance, could prove either a boon or a destructive force unparalleled in the history of mankind. "It all boils down to intent," says

Israeli strategist Uzi Arad, former National Security Adviser to the government of Israel, foreign policy advisor to PM of ISrael, Benjamin Netanyahu, has served in Mossad for over two decades. Once a loyal supporter of  Netanyahu, Arad has more recently emerged as one of his harshest critics. Advancements that could make or break the world are now in the hands of "charismatic leaders who use authoritarian methods and populist measures" to secure their own power.

"Problems are becoming bigger and more complicated, but the performance of the leaders who are supposed to address them has declined," said Arad. Populism has found immense support across the world but the advent of charismatic leaders - and their followers - has also led to the politicisation of certain administrative systems. "The politicisation ofgovernment procedures has placed greater reliance," says Arad, "On political positioning and posturing, at the expense of professionalism and empirical approaches. This is evident in thw ay governments are now staffed, in the West, primarily." The approach to certain matters, he says, "could be defined as sheer negligence."

Looking through the internet, he says, he finds "the one that has been on the rise is a sense of good humour. I'm choosing this because it was in the news - we have all seen a copy of the letter written by President Trump to Turkish President Erdogan. Such a letter, remarked one user on social media, I have never seen in my life! This is one of a kind'!"

Arad has "met Donald Trump once, at a dinner," he says. "He was great fun, because I never expected him to run for office! Talking over drinks, he was great fun." Years later, when Donald Trump became a contender, Arad decided to watch one of his debates. "I turned to my friends and said - totally unqualified!" Arad, despite his years in government, never fathomed that Donald Trump, "great fun" though he was, stood a chance of being elected. "Clearly, I was wrong. So much for me."

How, then, did "a person with such deficiencies," as Arad describes the President of the United States, win such overwhelming favour with the American electorate? It was the rise of another phenomenon - social media. "The direct impact those technologies made was instantaneous and stronger than anything in the past." Leaders have become more powerful in terms of effect, but many of them display personalities that are described as "flawed," Arad remarks.

Erdogan, Putin and Assad
"This is a crisis of the weak." Erdogan, "clearly a flawed character, tends to resort to force. Also a character," remarks Arad. Erdogan, like other nationalist leaders who have taken the world by storm, displays certain character traits which don't necessarily make him a good leader, but which strike a chord with the public. "His temperament, however, is very much a factor in the game."

As for Assad, Arad provides a rather clipped summary: "He is a certifiable psychopath." Anyone who can order the use of chemical weapons on his own people, he says, "Is a psycopath!" Syria has witnessed one of the most brutal civil wars in history. In Israel, where Syria's proclivity for chemical weapons has been closely observed for some time, experts would ponder what use would be found for them. A weapon of last resort, perhaps, if the ruling regime faced certain defeat? Or an opening strike in a war context, perhaps to disrupt Israeli mobilisation? "Never did we imagine them being used on their own people!"

Putin, Arad says, with an imperceptible sigh, "is consistent. Thank God for that!" Again, he is a leader prone to violence. Here, decisions are dictated by temperament and political concerns, but never the good of the state. "The prevalence of such leaders in the world poses a serious problem."

Role of intelligence
How does intelligence respond in such circumstances? Will they  be run by people who wish to speak truth to power? "No. They will be politicised, because that is what these leaders do," says Arad. "Look at the way the American President is leading the war against his own intelligence agencies! Never before have we seen this!"

Where does this all lead? The world is witnessed continual, accelerated change, making the future very hard to predict. But the real complicating factor, says Arad, "is the relationship between the followers and the leader. Another factor is foreign interference in the electoral processses. Election processes are being abused."

At the moment, Arad's view is bleak. "I don't see multi lateralism gaining ground, electoral processes being corrected, or protection from foreign influences. We have to be agile to prepare for surprises all the time but the way things look now, it's only getting worse. Particularly in the form of the greater use of violence."