Officials said that prima facie the cause of the accident could be due to track fracture. 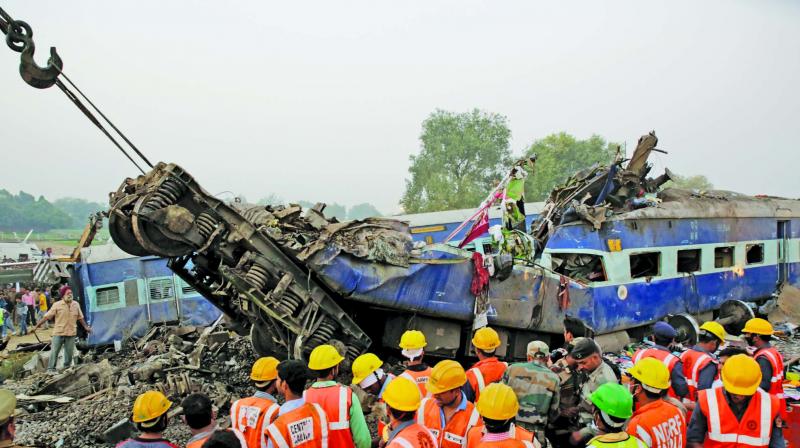 The damaged coaches of the Indore-Patna Expressed are being removed after it derailed at Pukhraya. (Photo: PTI)

Pukhrayan (UP): At least 120 passengers were killed and over 200 others injured, nearly half of them grievously, in the worst train accident in recent years when 14 coaches of the Indore-Patna Express derailed near Kanpur in the early hours of Sunday due to a suspected rail fracture.

The disaster took place just a little after 3 am when the passengers were jolted out of their sleep as the Patna-bound train (19321) jumped the tracks, badly damaging four ordinary sleeper coaches in which hundreds were trapped.

Of the four coaches, the S1 and S2 had telescoped into each other and most of the casualties were feared to have been in these two compartments. S3 and S4 coaches also suffered severe damage while an AC 3-tier coach was also affected but the casualties in it were not heavy.

As railway personnel assisted by those of the Army, NDRF and state police carried out the search and rescue operations, the number of casualties kept increasing by the hour. By around 8 pm, 120 bodies were recovered from the mangled coaches and most of them taken to Mati mortuary in Kanpur rural, according to IG (Kanpur range) Zaki Ahmad, who said a few more passengers were feared trapped.

The rescue operations will continue into the night under floodlights, officials said. “We have plans to work through the night. We have put up lights,” the Army’s Kanpur station commander, Brig. B.M. Sharma, said.

Among the dead, 62 people have been identified. At least 20 are from Uttar Pradesh, 15 from Madhya Pradesh and six from Bihar and one each from Maharashtra and Gujarat. The post-mortem of 27 identified bodies have been done and they were handed over to the families. The administration provided ambulances to the families of the victims to transport the bodies. Armyman Prabhu Narayan Singh, Anil Kishore of the BSF from Rohtas, Bihar, and UP police constable Lakhan Singh from Jhansi were among the dead. Altogether 76 passengers were seriously injured in the derailment, Mr Ahmad said. Around 150 other passengers received minor injuries in the mishap.

“Over 150 injured people have been rushed to nearby hospitals in the area. More than 30 ambulances were pressed into service,” he said.

He added the Railway Board’s member (engineering) would find out the cause of the mishap and action would be taken against those responsible.

With several passengers feared trapped, rescue personnel employed cold cutters to break open the compartments as gas cutters produced excessive heat and suffocation, hampering their efforts. A number of traumatised passengers were rescued. Many sat in daze for several hours near the wreckage as teams of Army doctors, railway officials and NDRF personnel, state PAC and other policemen as well as locals descended here. Several passengers frantically looked for their loved ones.

While Mr Yadav announced compensation of Rs 5 lakhs for the kin of each of the dead in the accident, Mr Modi had sanctioned Rs 2 lakhs. On his part, the railway minister enhanced the ex-gratia grant from Rs 2 lakhs to Rs 3.5 lakhs to the families of the dead.

The UP government will give Rs 50,000 to those seriously injured and Rs 25,000 for those with simple injuries. Madhya Pradesh CM Shivraj Singh Chouhan, who visited the injured in hospitals in Kanpur Urban, announced Rs 2 lakhs for the kin of each of the deceased and Rs 50,000 for the injured.

Mr Suresh Prabhu visited the injured in hospital late in the evening. “A high-level inquiry is on. We have mobilised our resources from all over the country. All our GMs have also reached the spot... We are trying our best to provide all kind of help to the injured. The immediate task ahead of us is to provide relief to people and help them in every way possible. I request you all to help and assist in the relief operations,” he said.

North Central Railway general manager Arun Srivastava said traffic on the Kanpur-Jhansi section will be opened in 36 hours. Four trains were cancelled and 14 more diverted after the derailment disrupted traffic on the route.

The interiors of the less-affected coaches also bore the hallmarks of the tragedy, with bedsheets, blankets, pillows, half-eaten food, suitcases and bags lying scattered. Outside, a 17-year-old girl was among those who desperately searched for their relatives. She was trying to trace her brother as both of them were returning to Patna after a swimming competition in Bhopal, along with their mother.

In the midst of the devastation, there were some stories of individual heroics too, with one rescue worker managing to pull out five persons alive, one of them oblivious that her limb had got severed.

Over 600 kms away, grim scenes played out at Patna railway station, with relatives of the passengers making desperate attempts to contact their kin and pleading with the officials for information.

“I have been calling my father, who was returning from Ujjain, since morning. Calls are going through, but he is not picking up,” said Ranjan. “We have not seen a tragedy of this scale ever in our lives. We are still trying to trace five members of our family,” Deepika Tripathi, a passenger, told reporters.

NDRF director-general R.K. Pachnanda said a total of five teams of the special rescue force, comprising 45 personnel each, were pressed into action at the accident site. “The rescue teams deployed cutters and hydraulic equipment to ensure that all the trapped passengers are evacuated safely from the rail bogies,” the DG, who reached the accident site, said. The NDRF rescued at least 53 passengers, including 16 badly trapped from the bogies. Among them were two children.

The UP chief minister instructed the DGP to personally monitor the relief operations and deploy traffic police along the route of the mishap site to ensure that there is a green corridor for ambulances to reach hospitals quickly.