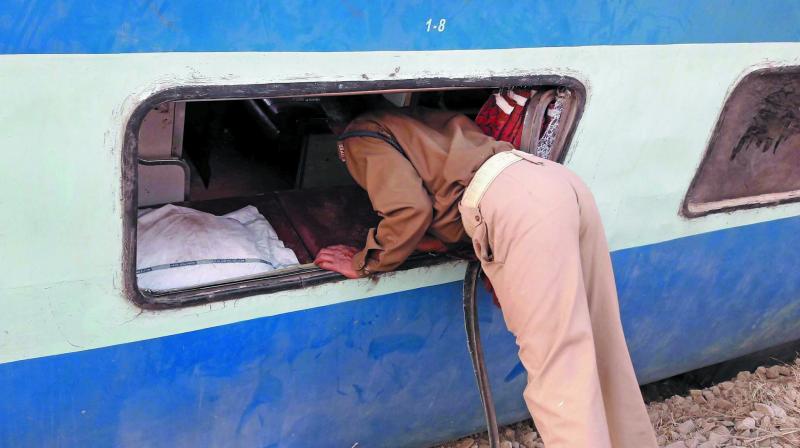 A policeman looks for survivors inside a coach of the derailed Indore-Patna Express near Kanpur. (Photo: PTI)

The NDRF teams have been able to rescue 50 passengers so far, including 16 of those who were trapped inside the mangled compartments.

NDRF chief R.K. Pachnanda, who visited the site, said an additional force has been kept on high alert so they can be rushed on a short notice.

Of the five teams sent to the spot, the first comprising 35 personnel was rushed to the site immediately after the accident — around 5.30am — from its Regional Response Centre (RRC) in Lucknow. The team reached the spot around 8am and started the search and rescue operation.

The NDRF teams comprised trained responders, equipped with disaster management gadgets and medical components. Since most victims were trapped inside the mangled bogies, it took a significant time to take out the bodies. Home ministry officials said the NDRF personnel were making best possible efforts to rescue the trapped victims. The home minister expressed pain over the loss of lives and said an inquiry will be held to find out the cause. “There will definitely be a probe to find out how it happened.”