India   All India  21 Nov 2017  Chop off fingers, break hands of those who speak against PM: Bihar BJP chief
India, All India

Chop off fingers, break hands of those who speak against PM: Bihar BJP chief

Rai later said he used the expression as proverb to convey that the party would strongly deal with people against country’s pride. 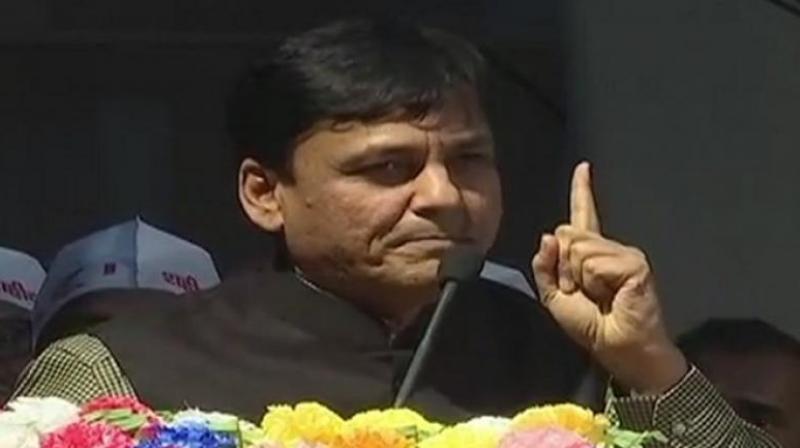 Patna: If any finger or hand is raised against Prime Minister Narendra Modi, it should be broken or chopped off - the threat came from Bihar BJP Chief and Lok Sabha MP from Ujiyarpur Nityanand Rai.

Speaking at a function called by the Vaishya and Kanu (OBC) communities, on Monday, Rai said, "..Unki or uthne waali ungali ko, uthne waale haath ko…hum sub milke…ya to tod dein, zaroorat pari to kaat dein. (Any finger or hand raised against the Prime Minister, we should get together to either break it or, if need be, chop it off.)"

Recalling Modi’s journey from his humble past to the post of Prime Minister, the Bihar BJP chief said, “Jinki ma khana parasti thi, Narendra Modiji ko khana khilane baithti thi, us thaali me ma ko na beta aur bete ko na ma dikhai deti thi. Aaj us paristhiti se uthkar wo desh ke PM bane hain — garib ka beta, uska swabhiman hona chahiye, ek ek vyakti ko iski izzat honi chahiye… (When Narendra Modi’s mother would serve food to him, neither she would see her son in that plate nor the son would see the mother. From such circumstances, he has grown to be PM — the son of a poor, each individual should be honoured by this.)”

Rai later clarified saying he used the expression of breaking hands and chopping fingers as proverb to convey that his party would strongly deal with those who rise against the country’s pride and security.

He added that his statement was not meant for any individual or any party.

The Bihar BJP chief told ANI, "My statement is being misquoted. It was just a sentence quoted from a phrase. If someone has been hurt then I express my regret and also apologies. I also take back my statement."

Bihar Deputy Chief Minister Sushil Modi shared the stage with Rai at the event on Monday.

A prominent Yadav leader from Vaishali, Rai took over as Bihar BJP chief in December 2016 as part of the BJP’s attempt to strengthen its base in the Yadav constituency.

An MLA from Hajipur, Rai was given a Lok Sabha ticket from Ujiyarpur in 2014 polls. He is one of the top state BJP leaders along with Sushil Modi and ministers Nand Kishore Yadav and Prem Kumar.