Shia board bats for temple in Ayodhya

Mosque can be build in Lucknow, says body. 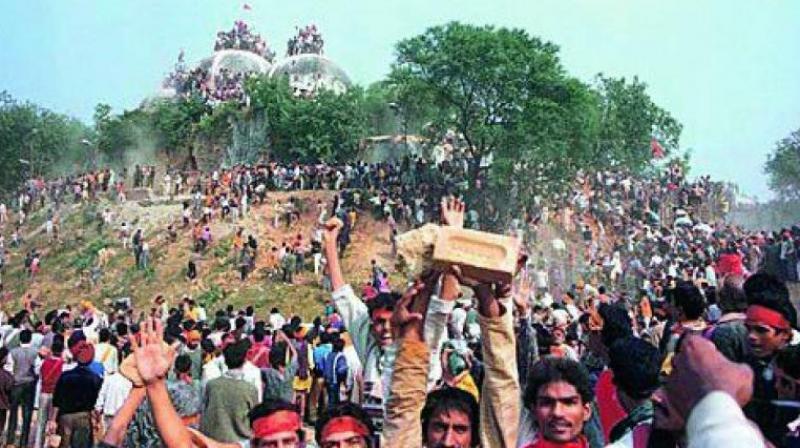 The Shia Waqf Board had laid claim to the demolished Babri mosque on the grounds that it was actually built by Mir Baqi.

Lucknow: The UP Shia Waqf Board has prepared a proposal for the Ayodhya dispute in which the temple will be built at the Ram Janambhoomi site in Ayodhya and the mosque will be built in Lucknow. The Shia Waqf Board chairman Syed Waseem Rizvi said that they have come up with the proposal following discussions with different stakeholders. “Following discussions with the different parties we have prepared a proposal in which a Ram temple will be built in Ayodhya and a mosque can be built in Lucknow”, he said on Monday. He also stated that this formula would ensure amity between the two communities. The Shia Waqf Board had laid claim to the demolished Babri mosque on the grounds that it was actually built by Mir Baqi, who was a Shia. Mir Baqi was a commander of forces when Babar was the king. It had earlier filed a petition in the Supreme Court seeking to be made a party to the case pending in the apex court. Mr Rizvi said that he, along with some saints and seers from Ayodhya , will soon approach the Supreme Court before December 5 with this solution to the Ram Janambhoomi-Babri Masjid dispute.

The Shia leader had recently met several seers including Mahant Dharam Das and Mahant Suresh Das in Ayodhya, for mutual agreement in the long-standing dispute. Earlier, the Shia Waqf Board had proposed to the apex court that a temple can be built in Ayodhya and the mosque be located nearby in a Muslim-dominated area. Various attempts have also been made by all the stakeholders till now to resolve the matter amicably but in vain. Recently spiritual leader Sri Sri Ravishankar also visited Ayodhya to negotiate for an acceptable settlement but his efforts proved futile. The Sunni Central Waqf Board has already rejected an out of court settlement and its counsel Zafaryab Jilani said that they would wait for the court verdict. Reacting to the Shia Waqf Board formula, Mr Jilani said that they were not even a party to the dispute as yet and hence, the formula was meaningless. He said Muslim would not give up their claim on the disputed site. Earlier, the Supreme Court had suggested that an out-of-court settlement was the best recourse to the dispute.

The apex court will commence the final hearing of the long-standing matter from December 5, a day before the 25th anniversary of the demolition of the medieval-era structure.