A senior officer said the CM’s spectacles broke but his eyes seemed to have been spared any damage. 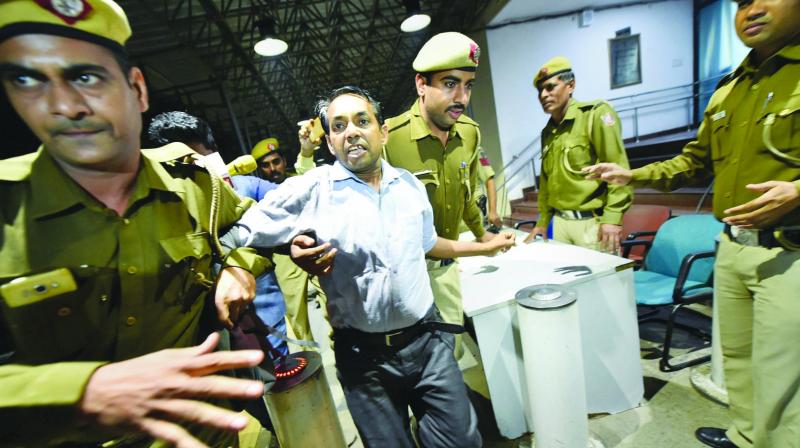 New Delhi: A man threw chilli powder at Delhi chief minister Arvind Kejriwal outside his Delhi Secretariat office on Tuesday, an attack which the AAP described as “politically motivated”, and claimed the BJP was hatching a conspiracy in collusion with the Delhi police to attack the CM. The man, Anil Kumar, who has been detained, was reportedly targeting the CM’s eyes. A senior officer said the CM’s spectacles broke but his eyes seemed to have been spared any damage.

Mr  Kumar, whose Aadhaar card was recovered, had reportedly brought the chilli powder to the secretariat in packets of “khaini” (chewing tobacco). After throwing red pepper powder at the CM, the accused reportedly threatened to shoot him after he comes out of jail, an official said. The attack took place outside the CM’s third floor room as he was going for lunch.

Delhi BJP chief Manoj Tiwari condemned the attack, saying it “cannot be tolerated or justified by anyone”, and demanded a “high-level” probe, noting that the attack had happened in a “high security” zone.

Some officials close to Mr Kejriwal accused the Delhi police of being lax over the CM’s security, and said this was the third attempt to harm him in a month.