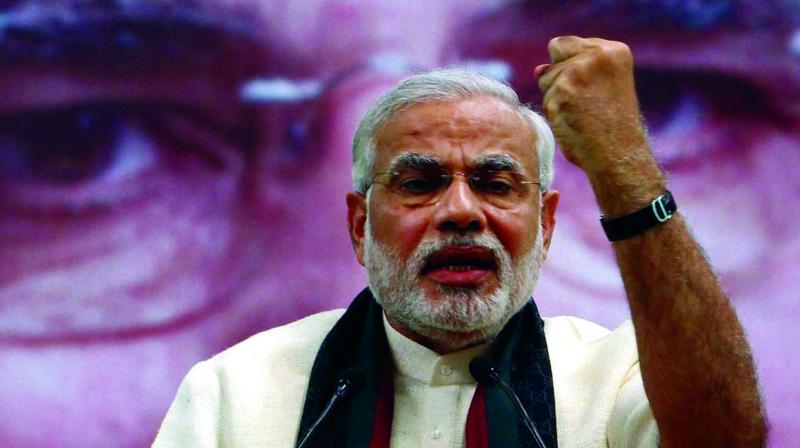 Bhopal: Prime Minister Narendra Modi on Tuesday said he had to use a ‘bitter’ medicine like demonetization to treat the deep-rooted corrupt system in the country.

“Corruption has ruined the economy of the country. We use toxic substance to get rid of termite. Similarly, I used a bitter medicine such as note ban to treat corruption in the country”, Mr Modi said while addressing an elections meeting in Jhabua in Madhya Pradesh.

He said the note ban had brought back the black money into the banking system and people who used to horde currency notes under their beds, factories and offices were now paying tax of every single penny of theirs.

The money was being used for welfare of the common men. Describing the farm loan waiver promise of Congress as sham, he exhorted the people not to “walk into the trap” of Congress which has failed to deliver on its similar promise in Karnataka being ruled by the party.

People in Karnataka had hit the streets to protest against the failure of Congress to write off farm loans in the state.

The loan waiver promise by Congress made ahead of 2008 parliamentary elections had also proved to be a sham, he added.

“They (Congress) used to hold loan mela in tribal areas before elections. They used to offer chickens to tribals saying that the chicken will hatch egg which will produce chicken again. The gullible tribals used to believe the ‘chicken, egg’ story of Congress and vote for the party”, he said.

He drew a comparison of performances of 55-year-rule of Congress and 15-year-rule of BJP in MP, saying that the governments under Congress had the pushed MP to backwardness. But, the Shivraj Singh Chouhan government had transformed the state from a sick state to a developing one.