India   All India  21 Nov 2019  WB Guv advises ministers to concentrate on work, not react to his remarks
India, All India

WB Guv advises ministers to concentrate on work, not react to his remarks

Either Chief Minister Mamata Banerjee should herself react or depute a specific minister to respond to 'my statements', the governor said. 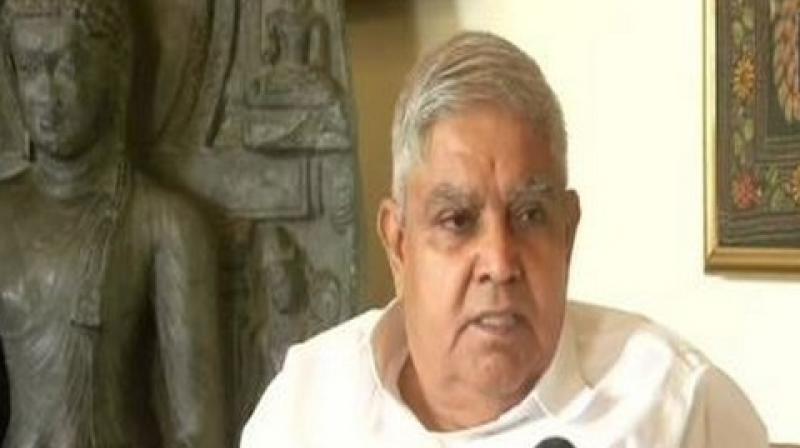 The governor was shown black flags allegedly by some Trinamool Congress (TMC) workers on his way to Domkal in Murshidabad district to attend an event on Wednesday. (Photo: File)

Kolkata: West Bengal Governor Jagdeep Dhankhar on Thursday asked state ministers to concentrate on their departments instead of reacting to his statements.

Either Chief Minister Mamata Banerjee should herself react or depute a specific minister to respond to "my statements", the governor said. "I have heard junior Health Minister Chandrima Bhattacharya reacting to my comments. I would request her to concentrate on her department as all of us are aware of the real condition of the department. "I think the chief minister should either react to my statements or else she should appoint a specific minister to react to my statements," Dhankhar told reporters here. All the ministers should "stop reacting to my statements just to please their boss (Banerjee)," he said.

The governor was shown black flags allegedly by some Trinamool Congress (TMC) workers on his way to Domkal in Murshidabad district to attend an event on Wednesday. He said he had sought a helicopter from the state government to travel to Murshidabad district but there was no communication from the other side in this regard.

"Actually the state government wants to control my movement. But let me make it very clear that whatever I am doing, it is well within my constitutional limits. Others can't dictate me," Dhankhar had said. Reacting to Dhankhar's statement, senior TMC leader and state minister Chandrima Bhattacharya had said that the governor should not exceed his brief.

"He should ponder over what he has been doing since assuming charge as the governor. What he is doing doesn't behove the post of the governor. The people of the state are angry, so a few may have protested against him," she said.

The governor and the state government have been locked in a war of words on a number of issues ranging from Dhankhar's seating at the Durga Puja carnival to comments on his security since he rushed to Jadavpur University to "rescue" Union minister Babul Supriyo, who had been gheraoed by a section of students. A tussle had also erupted over the state government's refusal to provide a helicopter sought by Dhankhar to travel to Farakka in Murshidabad district and Santiniketan in Birbhum district last week.