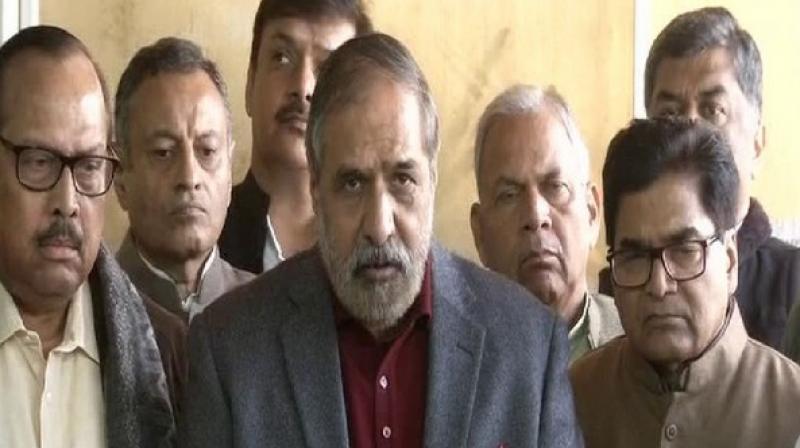 Senior Congress leader and former Union Minister Anand Sharma termed it as an attempt to convert India into a surveillance state. (Photo: ANI)

New Delhi: The recent directive of the Ministry of Home Affairs empowering select security and intelligence agencies with surveillance right, has invited collective ire of the Opposition.

Senior Congress leader and former Union Minister Anand Sharma termed it as an attempt to convert India into a surveillance state.

Also Read: 10 central agencies authorised to snoop on any computer

"Through this order, the BJP government is converting India into a surveillance state. It is the ultimate assault on fundamental rights and right to privacy. It is also in direct conflict with the Supreme Court judgement that the right to privacy is a fundamental right. The government has done it by stealth, we collectively oppose it because this gives unlimited power to all these agencies to monitor every information to intercept and complete surveillance, which is completely unacceptable in our democracy."

Expressing similar sentiments, SP leader Ramgopal Yadav said: "This is a dangerous order and the government is now on a dictatorial route. Worried after the electoral loss in the recent assembly elections, they are issuing these orders. I want to warn them that this order is only with them for four months now and they shouldn't dig a hole for themselves."

TMC MP Sukhendu Sekhar Roy also echoed his stand saying, "The government has flouted the order of the Supreme Court. The right to privacy is a fundamental right and now this is being encroached upon. This is a draconian move on the part of the government. They want to win the election by intercepting the movement of the opposition parties."

Coming down heavily on the government, RJD MP Manoj Jha said, "This confirms that we are living in an Orwellian state (a condition that George Orwell identified as destructive for a free society). This is troublesome for not only politician, traders but also for media persons who won't be allowed to write and speak what they want".

Earlier in the day, former finance minister P Chidambaram also expressed similar sentiments on MHA's order and told media, "Not studied the matter, but if anybody is going to monitor computers then it is an Orwellian state".

AAP MP Sanjay Singh touched upon the incidents of lynching and called it dangerous to the lives of leaders.

He said, "There are spies sitting in this government. The recent directive endangers the lives of Opposition leaders as phone tapping would reveal their locations and the way lynching trend has emerged in the country, it can be dangerous. This is undemocratic and unconstitutional".

Senior Congress leader and MP Ahmed Patel also outlined his concerns about misuse of the order by taking to twitter. "The sweeping powers given to agencies to snoop phone calls and computers without any checks and balances is extremely worrisome. This is likely to be misused," he tweeted.

The Centre on Friday authorised select security and intelligence agencies for purposes of interception, monitoring and decryption of any information generated, transmitted, received or stored in any computer resource.