The bill proposes to link Aadhaar with voter ID cards 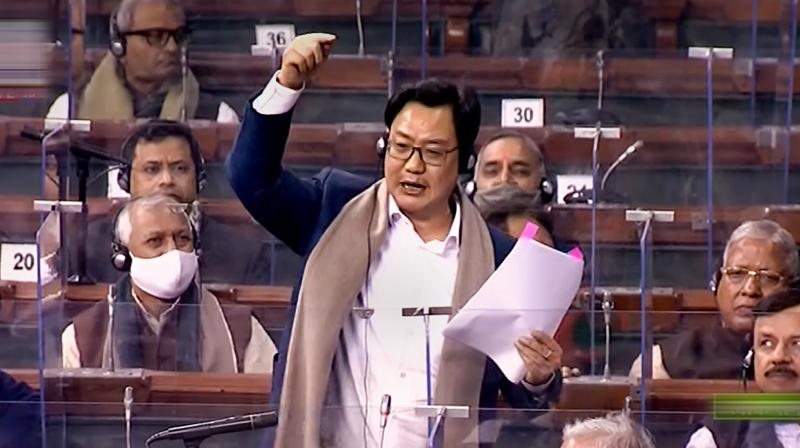 Union Minister for Law and Justice Kiren Rijiju speaks in the Lok Sabha during the Winter Session of Parliament, in New Delhi, Monday, Dec. 20, 2021. (LSTV/PTI Photo)

New Delhi: Amid vociferous protests by the Opposition parties, the Lok Sabha on Monday passed the Election Laws (Amendment) Bill 2021 in less than 30 minutes. Among other things, the bill proposes to link Aadhaar with voter ID cards.

Several Opposition members – including Adhir Ranjan Chowdhury, Manish Tewari (Congress), Asaduddin Owaisi (AIMIM), Kalyan Banerjee (TMC), Ritesh Pandey (BSP) and N.K. Premchandran (RSP) -- opposed the bill at the introduction stage, and demanded that it be referred to a parliamentary committee for proper scrutiny of the legislation.

Responding to this, law and justice minister Kiren Rijiju said several proposals which are now part of the current bill have already been suggested and recommended by the standing committee on law and personnel and the government has thoroughly discussed all the recommendations with the Election Commission and the states as well.  The minister further said the amendments in the bill will cleanse the election system. He added that the linking of Aadhar numbers with the electoral rolls was not compulsory or mandatory, but voluntary. The minister said that unlike earlier, now a person could get an opportunity to enrol as a voter four times in a year on the 1st day of January, April, July and October. The bill was passed through a voice vote after a brief discussion.

Opposing the bill, Congress MP Shashi Tharoor said by linking Aadhaar, which was for residents, and voter IDs, which are for citizens, the government could be “potentially” giving voting rights to non-citizens.

Initiating the discussion on the bill, BJP member Nishikant Dubey accused the Opposition of doing “vote bank politics” over the Election Laws Amendment Bill. He said “Bangladeshis and videshis” should not be made voters in India and that the Opposition parties were opposing the bill because “it hurts their vote bank full of Bangladeshis”.

Later, NCP MP Supriya Sule, without naming the minister, said one of the ministers of the BJP is allegedly from Bangladesh. “Now that Nishikant Dubey has said that the Congress vote bank is of Bangladeshis, then he must ask his government why there is a Bangladeshi citizen as a minister in the Union government,” Mrs Sule said.

Earlier, Congress MP Rahul Gandhi gave an adjournment notice in the Lok Sabha demanding a discussion over granting Sixth Schedule status to Ladakh, and the formation of a committee with representatives from both the Leh Apex Body and Kargil Democratic Alliance.