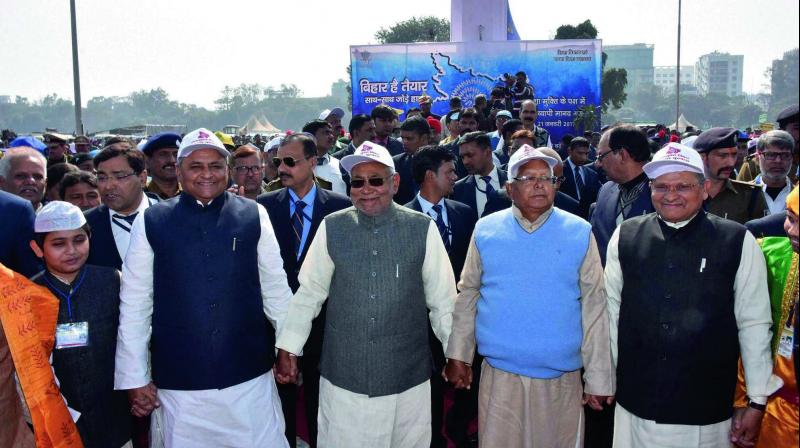 The chief minister joined hands with RJD supremo Lalu Prasad on the one side and state Legislative Assembly Speaker Vijay Kumar Chaudhary on the other to begin the chain of people to express unity in support of prohibition. Officials told this newspaper that three satellites, drone cameras for every district and aircraft were used to capture images of the human chain.

“As per reports reaching from across the state, more than three crore citizens participated in the human chain programme today,” Mr Kumar told reporters hours after the event. The “unexpected” rush of participants resulted in increase in distance on determined route of human chain to 11,400 km, Mr Kumar said. “Today, people have sent a message across the world that Bihar has changed,” said the chief minister, terming the programme “historical”.

The campaign was also supported by members of RJD and Congress. RJD chief Lalu Yadav took a dig at the BJP for supporting the move. “The BJP also surrendered after seeing a huge public support,” Mr Yadav said. A total prohibition on liquor was imposed in April 2016, while stricter provisions were included in the Act on August 1, 2016. The revised Act had provisions to punish family members of those who were caught consuming liquor. Bihar CM Nitish Kumar faced strong criticism from Opposition parties for including stricter clauses and making the Act non-bailable.

The Bihar BJP unit, which had earlier condemned the notification of Prohibition and Excise Act, 2016, terming it “anti-people and draconian”, on Saturday extended full support and took part in the human chain event. “Our party was never against the Prohibition Act. We always oppose provisions that are harsh in proportion to the crime. Even today we are standing in support of the move because we want a liquor- free society,” BJP leader Mangal Pandey said.

Sources said the BJP decided to support the human chain programme after PM Narendra Modi praised the Bihar CM for “taking a bold step to bring a social change”.