Jailed RJD chief has sought bail from HC; lone case filed against him in Patna has reached stage of examination of evidence. 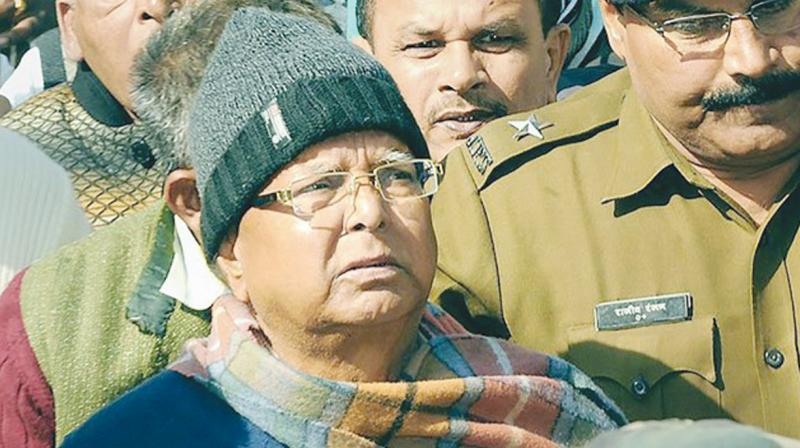 RJD chief Lalu Yadav on way to the special CBI Court in Ranchi.

Patna: Trouble for jailed RJD chief Lalu Prasad Yadav is far from over as the verdict in another fodder scam case against him is expected to be delivered by the special CBI court in Jharkhand on January 24.

Lalu Yadav, who has been held guilty in two fodder scam cases earlier, is facing trial in four more ases estimated to have caused a loss of Rs 950 crores to the exchequer, furnishing fake bills and vouchers for providing fodder and medicines to cattle, when he was the chief minister of Bihar.

On January 24, a Ranchi-based court's judgment in a case related to illegal withdrawal of Rs 33.61 crore in 1992-1993 from Chaibasa treasury is expected to be pronounced, a lawyer said.

Political rivals are sure that the RJD chief will take a long time to overcome the setbacks in fodder scam cases.

"Fodder scam is one part, another chapter of the story will begin soon as a probe into money laundering and railway hotel tender scam case has also picked up speed," ruling JD(U) leader Sanjay Singh said.

JD(U) spokesperson Niraj Kumar said, "For Lalu Yadav corruption has never been an issue. As the chief minister and finance minister, he never showed interest in stopping withdrawals from various treasuries. He is facing the consequences for conniving with those who were involved in the fodder scam."

The RJD has been alleging that cases against Lalu Yadav are an outcome of vendetta politics and the party will not leave any stone unturned in challenging the verdict in high court.

"My father is paying the price for not compromising with the BJP. If only he had compromised, his detractors would have compared him to Raja Harishchandra," said Lalu Yadav's younger son and former deputy CM Tejashwi Yadav.

Fraudulent withdrawal from government treasuries and use of fake bills and vouchers in the fodder scam had surfaced in 1996. The officials conducting raids in 1996 had found that money was paid to various non-existent companies for supplying fodder to animal husbandry department.

Five fodder scam cases were shifted to Jharkhand after the separation of the state from Bihar in 2001 while the trial in one case related to Bhagalpur treasury is going on in Patna's special CBI court.

The special CBI court in Ranchi on January 6 had sentenced Lalu Yadav to three-and-a-half years in prison in a case related to fraudulent withdrawal of Rs 89.27 Lakh from Deoghar treasury between 1991 and 1994.

On September 30, 2013, Lalu Yadav was held guilty in a similar case related to illegal withdrawal of  Rs 37.70 crore from the Chaibasa treasury and was sentenced to five years' jail. The Supreme Court had, however, granted bail to him in December 2013.

The conviction resulted in his disqualification as the member of Parliament and made him ineligible to contest elections for a period of six years.

The RJD chief is currently languishing at Birsa Munda Jail in Ranchi and has sought bail from the Jharkhand high court in the Deoghar treasury case.

In the prison, Lalu Yadav has been assigned a gardener's duties at the as per the prison manual, with a daily wage of Rs 93 for his work.

Political observers are of the view that "his troubles may not end with bail in this case as he is facing trial in four other fodder scam cases. Hearing in two of the cases has almost ended and the court is likely to pronounce verdict in both the cases within a span of one month".

The fodder scam case coming up for judgment on January 24, is being termed as a bigger case in comparison to the Deoghar treasury case in which Lalu Yadav was convicted earlier this month.

Hearing in the fourth fodder scam case pertaining to fraudulent withdrawal of Rs 3.31 crore from Dumka treasury is also in the final stages and the verdict is likely to be announced either in February or March.

According to a Ranchi-based lawyer, in the Doranda treasury case against Lalu Yadav the trial is likely to be completed by the end of this year.

He said that RJD chief and other accused in the Doranda case are facing trial for the withdrawal of Rs 139.39 crore — the largest sum misappropriated among all scam cases.

"This is the fifth case which Lalu Yadav has been facing in fodder scam case," he said.

In December, lawyers representing Lalu Yadav and other accused in the Bhagalpur treasury case had moved court to seek a production warrant. According to lawyers, the trial before the CBI court in Patna is at the stage of examination of evidence.

CBI had filed charge sheet against 44 accused, including Lalu Yadav and former Bihar chief minister Jagannath Mishra, in 2003 for alleged fraudulent withdrawal of around Rs 47 lakh from treasuries at Banka and Bhagalpur in 1995 -96.