Army says nothing political or religious in Bipin Rawat’s comments

Army reply came after AIUDF asked whether chief was 'indulging in politics' which is against his constitutional mandate. 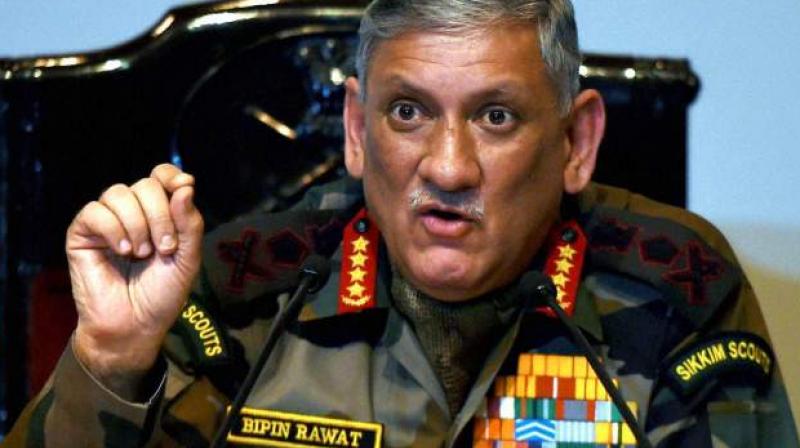 Army chief General Bipin Rawat referred to Ajmal’s AIDUF in connection with reports of increase in Muslim population in several districts of Assam, observing that the party has grown 'faster' than the BJP in the 1980s. (Photo: File | PTI)

New Delhi: The Army came into defence of its chief Bipin Rawat whose comment on Wednesday has drawn criticism from All India United Democratic Front (AIUDF) and AIMIM. The Army said that there was “nothing political or religious” in the Army chief’s statement about the rise of a political party, Maulana Badruddin Ajmal-led AIUDF in Assam.

The Army’s response came after AIUDF president Ajmal questioned if the Army chief was “indulging in politics” which is against the constitutional mandate given to him.

“Gen Bipin Rawat has made a political statement, shocking! Why is it a concern for the Army Chief that a political party, based on democratic & secular values, is rising faster than BJP? Alternative parties like AIUDF, AAP have grown because of the misgovernance of big parties,” Ajmal tweeted.

AIMIM chief Asaduddin Owaisi also criticised the Army Chief on Thursday for talking about the rise of AIUDF, saying he should not interfere in political matters as it is not his work to comment on the rise of a political party.

In a tweet, Owaisi also reminded General Rawat that the Army will always work under an elected civilian leadership in India.

The controversy started after General Bipin Rawat spoke of proxy warfare in the Northeast by Pakistan with help from China and the “planned” influx of Bangladeshi immigrants.

The Army chief also referred to Ajmal’s AIDUF in connection with reports of increase in Muslim population in several districts of Assam, observing that the party has grown “faster” than the BJP in the 1980s.

“There is nothing political or religious in the talk. Army Chief just mentioned amalgamation and development in the seminar on North-East organised at DRDO Bhawan on February 21, 2018,” the Army said.

Reacting to the Army statement, Ajmal tweeted: “If nothing political, why was Army Chief dragging a political party, in his speech, whose representatives are democratically elected by Indian citizens?”

Speaking at a seminar on ‘North East Region of India — Bridging Gaps and Securing Borders’, organised by the Centre for Joint Warfare Studies and Headquarters Integrated Defence Staff of the Ministry of Defence, General Rawat said, “I don’t think you can now change the population dynamics of this area. If it was five districts to eight to nine… the inversion has taken place, whichever be the government.”

The AIUDF, which was formed in 2005 with an aim to champion the cause of Muslim community, currently has three MPs in the Lok Sabha and 13 legislators in the state assembly.