Advocate BS Joon, appearing for the MLAs, said there was no fresh ground for seeking custody. 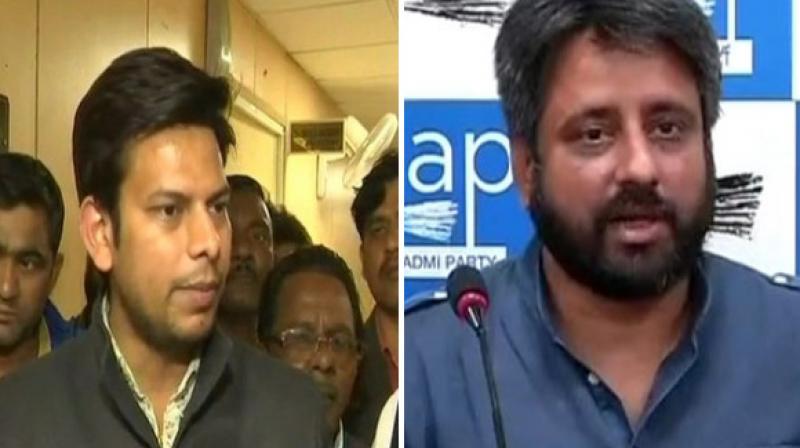 AAP MLAs Amanatullah Khan and Prakash Jarwal have been sent to judicial custody for 14 days in connection with an alleged assault on Delhi Chief Secretary Anshu Prakash. (Photo: ANI)

The two MLAs, on expiry of their one-day judicial custody, were produced before Metropolitan Magistrate Shefali Barnala Tondon who heard their bail applications and put up for hearing a fresh application filed by the Delhi police seeking their custodial interrogation to ascertain why the Chief Secretary was called at the midnight. “Arguments of both the parties have been heard. The prosecution and the defence have relied on certain judgements. The court needs time for perusal of the same. Put up for order on bail and police custody tomorrow (Friday),” the court said.

During the proceedings, the police moved the fresh plea seeking police custody of the accused persons saying they were required to be interrogated to find out why the Chief Secretary was called at the midnight to CM’s residence.

Advocate BS Joon, appearing for the MLAs, said there was no fresh ground for seeking custody and the police was relying on the same old arguments.

The court had on Wednesday termed the alleged assault on the Chief Secretary was a "highly sensitive" case, but refused the plea of the Delhi Police to quiz them in custody for two days, saying the legislators were ready to cooperate in the investigation and no case property was to be recovered from them, which was the basic purpose of police custody.

The two MLAs were arrested in connection with the alleged assault on the bureaucrat during a meeting at Chief Minister Arvind Kejriwal's residence on the night of February 19. While Jarwal, an MLA from Deoli, was arrested on Tuesday night, Khan was taken into custody yesterday afternoon.

While seeking custodial interrogation of the accused, Additional Public Prosecutor Atul Shrivastava on Thursday said there were numerous criminal cases pending against both the MLAs since 1995.

“He (Khan) had started with slapping a junior engineer and today he has assaulted a chief secretary,” he said.

The prosecutor said the Chief Secretary was made to sit between Khan and Jarwar who threatened him to sign a document for release of funds for an advertisement relating to corruption and education. Prakash was then physically assaulted and slapped by the MLAs, he said, adding that the two accused were required to be interrogated to find out why the Chief Secretary was called at midnight.

The prosecutor also argued that the injuries received by the Chief Secretary show that the offence under section 308 (attempt to commit culpable homicide) of the IPC was also committed by the accused. He said the police required time to go through the CCTV footage of the place where the meeting was going on and a minimum of 10 hours was required for that.

Advocate Rajiv Mohan, appearing for the Chief Secretary, argued that the accused should be sent to police custody to unearth the entire conspiracy behind the incident. He said the court should look into the antecedents of both the MLAs and the gravity of offence before passing any order.

He told the court that Chief Secretary was called for a meeting at the CM’s residence to discuss civil supply issue. But when the CS reached the camp office of the CM, he was surprised to see that 11 MLAs were already sitting there.

“11 MLAs were gathered to force me to sign the advertisement by showing me muscle power. Bureaucracy is not needed if this is how bureaucrats will be treated,” Mohan said.

Joon, appearing for the MLAs, said there is no fresh ground for seeking custody and the police was relying on the same old arguments.

Instead of moving a fresh police custody plea, they should have challenged Wednesday's order but did not do so.

He also refuted the submission of the police seeking time to record the statement of VK Jain, advisor to the CM, and added that his statement was already with the police which had deliberately not submitted it in the court on Wednesday.

With regard to the allegations that the CCTV footage was tampered, the advocate said the truth could only be found out by experts and not the police.

Joon said the police, instead of acting on the complaint of Jarwal on an earlier matter, moved swiftly to register an FIR on the bureaucrat's complaint. No action has been taken on Jarwal's complaint against the Chief Secretary for allegedly using derogatory and casteist remarks against him and another MLA, he added.

Countering the submission of the police regarding criminal cases pending against the MLAs, he said all the cases were lodged against the accused while trying to raise their voice for the public and investigation in them were pending.

He said the entire FIR was fabricated and a number of facts were invoked much later at the instance of senior officials in the bureaucracy and the issue of advertisment as raised by the complainant is not mentioned in the FIR.

He reiterated that the incident was a repercussion of the ongoing power tussle between the Centre and Delhi.