India   All India  22 Feb 2018  Honour martyrs at airports, and on aircraft carrying their mortal remains
India, All India

Honour martyrs at airports, and on aircraft carrying their mortal remains

Reportedly, more than 50 mortal remains of martyrs are carried every year through civil airliners to their native places. 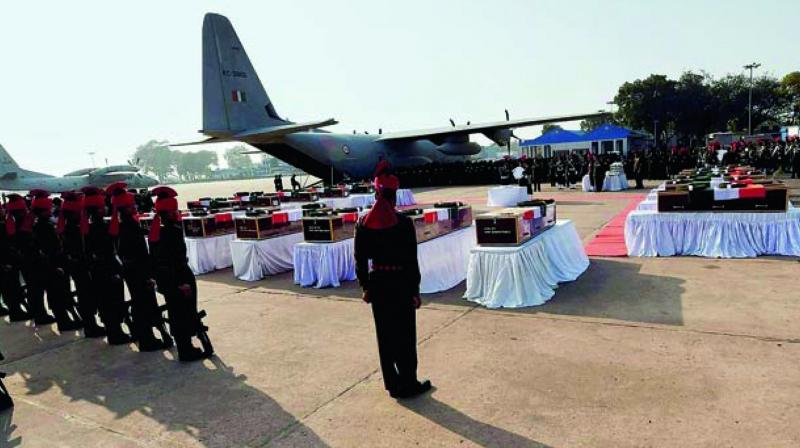 Army jawans pay homage to colleagues killed in avalanches on the LoC at a ceremony in New Delhi. (Photo: PTI)

Since the surge of Pakistan-supported terrorism began in the late 1980s in Jammu and Kashmir, New Delhi’s domestic airport at Palam often became a destination or transit point for mortal remains of Army’s fatal casualties being transported to the martyr’s home town/village. Encased in plywood coffins, the remains of those martyrs transported by civil airlines used to be brought to a shabby cargo shed of the airport authority for collection/onward transportation. As there was no other place allotted for this purpose, even the ceremonial honouring of the martyr by draping the coffin with the National Tricolour before carrying away for onward movement was done in that unkempt shed.

Next came the issue of announcing to passengers on board civil airlines flights carrying mortal remains of soldiers killed in action and requesting for a brief silence. In some countries, the US for instance, the captain of the aircraft announces the carriage of mortal remains to passengers, who solemnly pay their respects. Also water-tankers at airports spray water on such aircraft as a mark of respect.

In May 2014, Rajya Sabha MP Rajeev Chandrasekhar wrote to Air India chairman Rohit Nandan questioning why one of its crews refused to announce the presence of the mortal remains of an Army officer on a flight carrying his body from Srinagar to Delhi. The mortal remains were of brave-heart Maj. Mukund Varadarajan, who was killed in an encounter with Pakistan Army supported terrorists at Shopian, Jammu and Kashmir and were to be air-transported from Srinagar to Delhi and onward to Chennai, where his family lived.

The Army officer who was accompanying the body of slain officer had requested the crew member that an announcement be made that mortal remains of the officer were on board but his request was turned down by the airline crew citing aviation rules.

“The Major sacrificed his life and future for the countrymen but the bureaucratic manner in which the airline crew responded to this request, is sad and shameful, and conveys an impression of callousness and disrespect towards brave men and women, on part of Air India,” said Mr Chandrasekhar, who in his letter urged the Air India chairman “to find out the people involved in this incident. I would also request you to let me know what are the aviation rules that were quoted in this instance.”

He said if rules prevent the people from honouring the heroes who died protecting the nation, “then they need to be changed or abolished altogether. A nation must honour its brave people who sacrifice their lives for the country.”

There have been numerous proposals by armed forces veterans and citizens that the sacrifices of martyrs should be suitably announced on board civil airlines aircraft carrying mortal remains of martyrs to be transported to their native places. Proposals to this effect were considered by the Directorate General of Civil Aviation (DGCA). While in most cases the responses have been positive, executive instructions have not yet been issued.

Reportedly, more than 50 mortal remains of martyrs are carried every year through civil airliners to their native places. It is proposed that a short announcement informing and requesting passengers for 30 seconds/one minute of silence be made on these planes. The announcement can be made at the beginning, mid-flight or towards the end of the flight.

The DGCA has forwarded a proposal from the armed forces to all airlines for comments, and government officials indicated that it may soon be accepted. The DGCA also forwarded a possible template for the announcement that could be made on such flights, to read like: “It is our proud privilege/moment to announce that today on our flight we have amongst us the mortal remains of an extremely brave and gallant soldier of the Indian Army/Navy/Air Force... We request you to observe 30 seconds of silence for the departed soul.”

According to the DGCA the script is in the draft stage, and not final yet and will be finalised based on suggestions from airlines. However, an airline official reportedly speaking off the record, hinted that using words like “proud” and “privileged” may be inappropriate. “I think it is a bit awkward when carrying their remains. If they were on board it would be fine,” the official was reported to have said. If so, it appears to be a typical bureaucratic response.

Aviation analyst and former head of operations at IndiGo and Air India, Shakti Lumba is reported to have said, “Bodies of martyrs are being carried in flights for many years and everyone involved in the process, including the airline, pay the respect they deserve. Such directives should come from the government directly rather than the aviation regulator.” The current rules followed by airlines while carrying bodies of armed forces personnel do not include any announcement.

The proposed announcement by the captain of the flight is expected to read like:

While the gesture is proposed only for battle causalities, it may be appropriate to consider extending it not only to personnel of the Army, Navy, Air Force and Coast Guard, but also to those of Central Armed Police Forces who have sacrificed their lives in Jammu and Kashmir or other parts of the country while fighting enemies or terrorists.