As per the woman her husband, Arjun Patil earned a mere Rs 30,000 and had not taken a 'single extra rupee'. 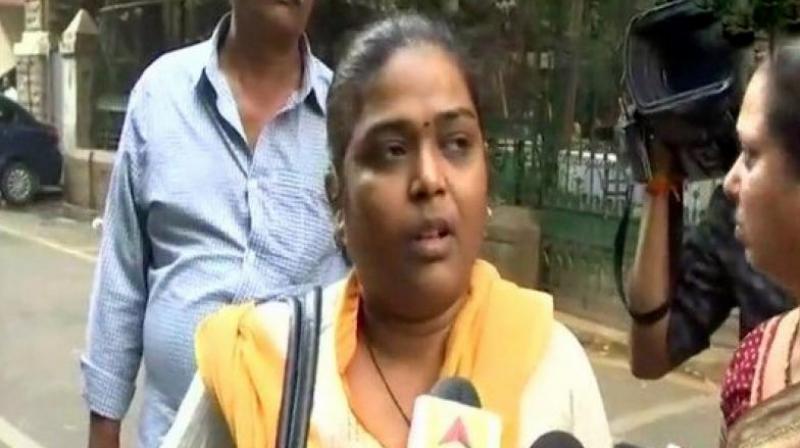 Sujata Patil, wife of Arjun Patil asked the probe agency to catch the big fish and said, 'He did what he was told and has not done anything illegal.' (Photo: ANI)

Mumbai: As the Central Bureau of Investigation (CBI) intensifies its probe in the biggest bank scam in the country, wife of one of the officials of Firestar group arrested in connection with the Punjab National Bank (PNB) fraud - Nirav Modi case, has cried foul at the arrest of her husband. Sujata Patil, wife of Arjun Patil, alleged that the celebrity jeweller is the sole culprit behind the scam,

In an emotional outburst outside the sessions court in Mumbai on Wednesday, Sujata Patil said she would beat Nirav Modi with 'chappal' (slipper) if he came to India.

"My husband has been working there for 10 years; he also does paperwork like the others. Nirav Modi is responsible for all this, bring him in front of me. If he comes, I'll thrash him with my slippers," Sujata Patil, wife of accused Arjun Patil, senior executive, Firestar group, told news agency ANI.

The senior executive at Firestar Group has been arrested for preparing the applications for the LOUs. As per Sujata, Arjun earned a mere Rs 30,000 and had not taken a "single extra rupee".

"He did what he was told and has not done anything illegal," she said, telling the probe agency to catch the big fish.

She shouted that rapists and murderers were walking free, but her innocent husband had been arrested.

"A CBI team searched our house but didn't find anything, because we have nothing to hide. Current events seem like a TV serial, and CBI, (Nirav) Modi and the media are to be blamed," she said.

Arjun Patil, along with other accused has been sent to police custody till March 5.

The PNB detected Rs 11,400 crore scam, in which jeweller Nirav Modi acquired fraudulent letters of undertaking from one of its branches for overseas credit from other Indian lenders.

The scam started in 2011 and was detected in the third week of January 2018, after which the PNB officials reported it to the concerned agencies.

The investigating agencies have been cracking down on the properties of Nirav Modi and his uncle Mehul Choksi, but have been clueless about their whereabouts ever since the scam unfolded.