India   All India  22 Feb 2019  Wave of gratitude towards Sikhs sweeps over Valley
India, All India

Wave of gratitude towards Sikhs sweeps over Valley

A cartoon in Greater Kashmir newspaper showing a Sikh man in a boat holding out a hand to a drowning Kashmiri has gone viral on social media. 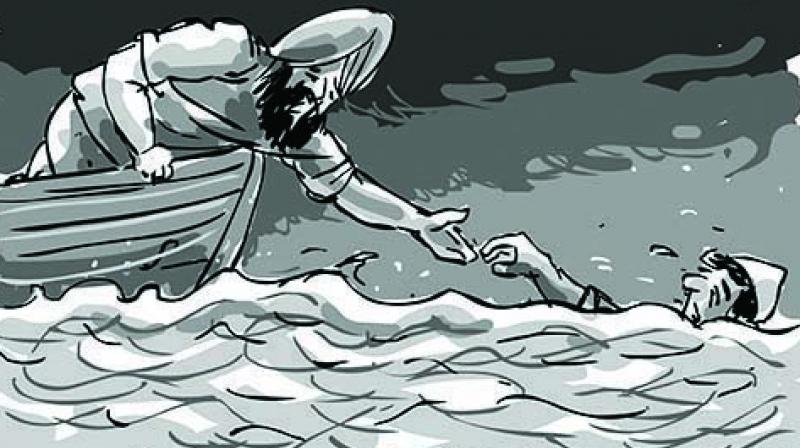 A cartoon that appeared in the Greater Kashmir newspaper.

Srinagar: Amid the wave of gratitude in the Valley for the Sikhs who came to the rescue of Kashmiri trad-ers, labourers and students in distress in different parts of the country after the Pulwama terror attack, hotels and other business concerns here have offered huge discounts and even free stay to the members of the community.

Since Tuesday evening, social media platforms and also some vernacular newspapers have carried announcements of apart from free hotel stays and discounts on purchase of merchandise free admissions to educational institutions and English-speaking courses and free medical check-ups and discounts on medicine for Sikh patients.

“In the event of Khalsa Aid’s humanitarian outreach extended to Kashmiris in distress post-Pulwama episode, Shaheen Super Bazar, Budgam extends extra 6% discount to Sikh community customers. This offer is valid for 6 months from today (February 20). Remem-ber: The language of heart is mankind’s common language,” reads one such announcement.

Another post annou-nces “If any Sikh family wants to admit its ward in SBM High School, Kanispora no fee will be charged from it up to 10th Class”. A local lawyer Hilal Ahmed Dar wrote on his Facebook timeline “If any Sikh br-other needs a legal assistance, I will provide him free assistance till disposal of the case.”

A cartoon in Greater Kashmir newspaper sh-owing a Sikh man in a boat holding out a hand to a drowning Kashmiri has gone viral on social media.

Over the past three days, many of over four thousand Kashmiri trad-ers, students and worke-rs allegedly hounded out of various places across the country in the aftermath of the Pulwama terror attack were escorted back home by the volunteers of Khalsa Aid, an international NGO of Sikhs, with the aim to provide humanitarian aid in disaster areas and civil conflict zones around the world.

These people have said that they were given shelter and food at various Gurudwaras after they were evicted from their private accommodations or “thrown out” of hostels in reprisal to the killing of 49 CRPF in the Pulwama attack.

Gurpreet Singh, head of Khalsa Aid in India, has said that the UK-based NGO decided to offer help to distressed Kashmiris after coming across disturbing videos of harassment and calls for help from the victims. He said that Khalsa Aid was able to evacuate more than 300 such students who were studying in Uttrakhand and Haryana safely to the Valley via Chandigarh and Jammu.

Jagmohan Singh Raina, chairman of All Parties Sikh Coordination Committee (APSCC), a representative organisation of the J&K Sikhs, said that the community helped the Kashmiris in distress as it did not want the repetition of the 1984 carnage. He asked the people of the country especially those living in the Northern states to give up “hatred” against the Kashmiris. “We urge the people to maintain communal harmony and brotherhood at every cost. The people who visited Kashmir in the recent past as tourists should take the initiative and come up as ambassadors of peace,” he said adding “It is highly unfortunate that Kashmiris are being targeted in different parts of the country for no fault of theirs”.

Many Kashmiri traders and students who have returned here said that some people from the majority Hindu community also helped them. “I was protected from a mob by three men from the majority community one of whom tried to pacify it by saying ‘his Muhammad lives in our temple and our Ram in his mosque’,” said Muhammad Aslam, a trader from Srinagar’s Nawa Kadal locality who was running a handicrafts shop in Haryana but had to abandon it and return home in the face “threat to my life”.