India   All India  22 Feb 2022  Karnataka HC to govt: If institutions permit hijab, will you object?
India, All India

Karnataka HC to govt: If institutions permit hijab, will you object? 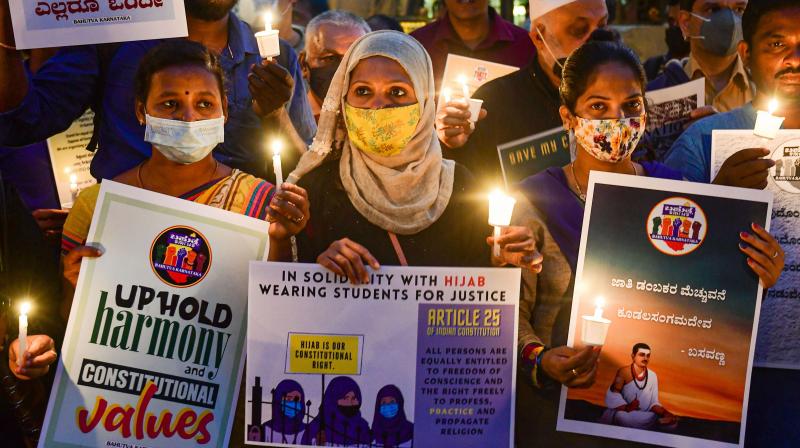 New Delhi: On a day when Union Home minister Amit Shah said all religions should accept school dress code, the Karnataka government told the high court hearing the hijab ban row that the state has not banned wearing hijab and it is up to the institutions to decide on the uniform for its students though the element of introducing religious dress should not be there in uniform. The state on Monday also argued that the petitioners in the right to hijab case were claiming that wearing of hijab was an essential religious practice, with a view to bind every Muslim woman to a particular dress code, hence, the court must decide whether prohibiting hijab actually interferes with the right to freedom of religion.

Mr Shah in an interview to a news channel said, “It is my personal belief that people of all religions should accept the school’s dress code. The issue is now in court, and the court is conducting its hearings on the matter. Whatever it decides should be followed by all.”

The three-judge bench of Chief Justice Ritu Raj Awasthi, Justice Krishna S. Dixit and Justice J.M. Khazi, which is hearing a batch of petitions filed by Muslim girl students against the Government Order (GO) which bans wearing of hijab in institutions, sought to know whether or not the state would object if institutions permit wearing hijab.

"What is your stand? Whether hijab can be permitted in institutions or not?" Karnataka Chief Justice asked to which advocate general Prabhuling Navadgi responded that the operative portion of the GO leaves it to the institutions. The AG had on Friday conceded that possibly the GO could have been better worded and the references to hijab could have been avoided. On Monday, when the CJ again asked whether the state will have objections if institutions permit hijab, the AG said the state would possibly take a decision as and when the issue arises.

"You have to take a stand. It is argued that they may be permitted to wear the same colour headdress as permitted in uniform prescribed by the college. We want to know the stand of the state? Suppose if they are wearing duppata, which is part of uniform, can it be allowed?" the CJ asked again.

"We have not prescribed anything. The GO gives complete autonomy to institutions to decide uniform. Whether students are allowed to wear a dress or an apparel which could be a symbol of religion, the stand of the state is… the element of introducing religious dress should not be there in uniform. As a matter of principle, the answer is in the preamble of Karnataka Education Act which is to foster a secular environment," the AG said.

The court then asked if the state has not banned wearing of hijab then what is the need to decide on Article 25. However, the AG argued that the need to address the constitutional rights under Article 25 might be necessary as institutions can ban hijab. He added that in this case, the Udupi Pre-University College has taken a stand that it will not allow hijab in the institution. “The second issue – Essential Religious Practice -- might be necessary because of this… The question that would be posed is, can you prevent someone from entering the institution for wearing hijab. If lordships are to decide that wearing of hijab does not fall under Article 25, then it would be different for students and institutions. The entire question revolves around whether wearing of hijab falls under Article 25," the AG said.

Mr Navadgi further argued, “The petitioners are seeking for a declaration of a particular dress format to become part of religious sanction so as to bind every woman who follows Islamic faith. That is the seriousness of the claim but they have not placed any material on record to substantiate their claim for declaration that wearing of hijab is an essential religious practice.” He referred to the Supreme Court verdict in the Sabarimala case which lays down how to determine the essentiality of a religious practice.

The AG mentioned that for a religious practice to be deemed essential, the petitioner has to prove that the practice is fundamental to that religion and if that practice is not observed, it would result in change of religion itself. The practice must be co-extensive with that religion and it must have a binding nature and has to be compulsive so that if one disobeys, he/she ceases to be part of that religion. The AG further said whenever reliance has been placed on the Quran to show that certain practices were essential to religion, the Supreme Court has negated it in at least four instances, including the Triple Talaq case.

"Is Essential Religious Practice also applicable to (freedom of) conscience?" asked Justice Khazi to which the AG said, “The concept of freedom of conscience is something which relates to belief or non-belief. What you manifest as your conscience results in religious practice."

Meanwhile, prohibitory orders restricting any gathering or agitation around educational institutions in the city, in view of the ongoing hijab controversy, have been extended till March 8. The initial orders passed on February 9 will be in force till February 22 morning.

Passing a fresh order on Monday, Bengaluru police commissioner Kamal Pant said in certain parts of the state, protests have been witnessed in connection with the enforcement of uniform rules in schools/colleges.

"Since the issue is still alive and possibility of holding protests, for and against the same (uniform) in Bengaluru city cannot be ruled out, it is considered appropriate to extend the aforementioned prohibitory orders issued under Section 144 of the CrPC for another two weeks to restrict any gathering, agitation or protests of any type around the schools, PU colleges, degree colleges, or other similar educational institutions in Bengaluru city," the order said.

Several parts of the state have been witnessing protests over hijab versus saffron scarves row since December end.