The Napal President observed that the country has had an age-old relationship with the Jagannath temple. 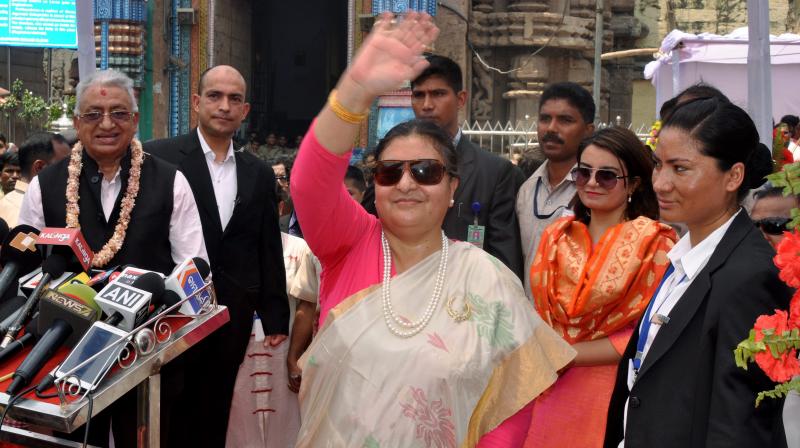 Puri(Odisha): Nepal President Bidhya Devi Bhandari on Friday assured the Jagannath Temple Administration (JTA) in Puri that she would take up the issue of shortage of kasturi, an essential commodity used in temple rituals with the Nepal government. Kasturi is the musk collected from the male deer’s navel.

Addressing media persons during her visit to the Puri temple, Ms Bhandari said that she would take measures for resolving the problem of kasturi shortage faced by temple authorities.

“I am happy after taking darshan of Lord Jagannath. President Pranab Mukherjee had invited me to India and I am grateful for the arrangements made by the Union and state governments and the respect I have received from general public. I would take up the kasturi shortage issue with the Nepal government at the earliest,” she said.

The Napal President observed that the country has had an age-old relationship with the Jagannath temple.

“Both India and Nepal have been sharing a cultural relations since long. I hope both the countries continue to maintain this friendly relation in days to come,” she added.

The 12th century Jagannath Temple earlier used to receive kasturi, the rare and precious item from Nepal, during the reign of kings. The temple authorities prefer kasturi, used for the Mukh Shringar of Lord Jagannath the sibling deities during Rath Yatra, from Nepal for its purity.

The Nepal President, who is on a two-day visit to Odisha, offered her prayers to Lord Jagannath this morning. She was greeted by servitors at the Singhadwara, the main entrance to the temple, and later escorted into the temple amid tight security.