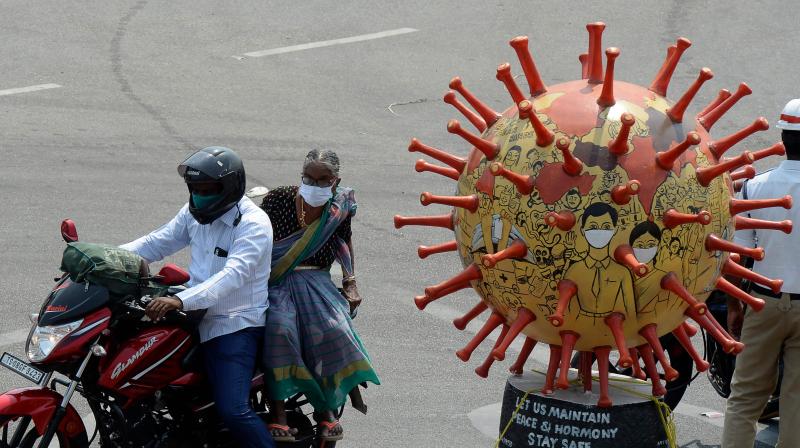 Motorists drive past a coronavirus-themed globe kept at a traffic junction during a government-imposed nationwide lockdown as a preventive measure against the COVID-19 coronavirus, in Hyderabad. PTI Photo

Hyderabad: An 87-year-old man in Neredmet tested positive for Covid-19 after visiting Gandhi and Care hospitals for a routine pneumonia check-up. He transmitted the infection to his 80-year-old wife and grand-daughter.
The couple did not have any travel history or contact with Tablighi Jamaat congregation returness.

Acting on a tip off, Covid-19 teams have quarantined as many 36 persons living the same premises and they were sent to Nature Cure Hospital in Begumpet for isolation and declared Siri Colony as a containment zone. All of them were tested, and about 15 have returned negative. They have been sent to home quarantine.

According to officials deputed on Covid-19 duty in Malkajgiri, the octogenarian, accompanied by his son, was taken in a personal vehicle for a routine check-up to Care Hospital and Gandhi Hospital on Saturday. However, when Covid-19 teams conducted a test, the man tested positive, as also his wife and grand-daughter. The man’s son and daughter-in-law, residing in the same house tested negative.

“Since his son is a military person and daughter-in-law is young, their immune system resisted the infection,” authorities said.

Moreover, another three persons tested Covid-19 positive in Sadullahnagar in Moul Ali and Jawaharnagar East in Malkajgiri. Over 100 people were sent to home quarantine in the circle and three areas were declared containment zones. Home quarantine for all them will end on May 1.

“Despite our best efforts, people have been stepping out for silly reasons in the containment and non-containment zones. Armed with a medical prescription, a few persons have been coming out purchase a single tablet, salt and other things. For instance, three persons stepped out of their houses to purchase a BP tablet. We have been toiling 24/7 to contain the deadly virus. If the public does not co-operate, more containment zones will emerge in the city,” said a top official on Covid-19 duty.