Opening of Srinagar-Leh and Manali-Leh highways is crucial for the supply of ammunition, food, fuel, essentials for Indian troops in Ladakh 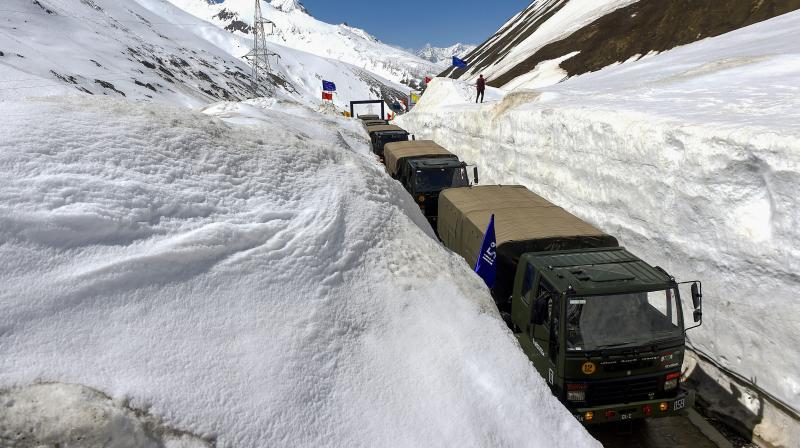 This year the ZojiLa Pass opened after a closure of 110 days, compared to an average of 150 days in previous years. — (Photo:PTI)

New Delhi: The roads to Ladakh have opened after winter amidst the continued standoff with China. The ZojiLa Pass, which connects Kashmir to Ladakh, was opened on Wednesday and the Manali-Leh highway was opened some three weeks ago.

The opening of the Srinagar-Leh and Manali-Leh highways is crucial for the supply of ammunition, food, fuel and other essentials for the Indian troops who are deployed in Ladakh. The opening of these roads indicates that the Army has successfully managed the winter deployment of the additional troops who were rushed into Ladakh after the tensions soared with China. Last year the Indian Army had rushed supplies to Ladakh for some 50,000 troops which were to be stationed in the area during winter at sub-zero temperatures due to the tensions with China.

The strategic 428 km Manali-Leh highway was opened by the Border Roads Organisation more than one-and-a-half months ahead of schedule. However, due to the snowfall, movement on it has been getting affected. The strategically crucial mighty ZojiLa Pass on the Srinagar-Kargil-Leh road was opened Wednesday by the BRO, establishing road connectivity to Ladakh after four months. The pass closes every year in winter due to the heavy snowfall and opens only by the end of April the next year.

This year the ZojiLa Pass opened after a closure of 110 days, compared to an average of 150 days in previous years. Located at a height of 11,650 feet, ZojiLa is a strategic pass that provides a vital link between Kashmir Valley and Ladakh and is the key to the operational preparedness of the armed forces in the sector.

Due to the tensions with China and focus on infrastructure development, there was focus this time to keep ZojiLa Pass’ closure to the minimum.

This time the ZojiLa Pass was kept open till December 31, 2020. Also, the snow clearance operations to open the road began on February 7 by Projects Beacon and Vijayak of the BRO. The connectivity across ZojiLa was initially established on February 15 and it was planned to open the pass for the Army and civil traffic by the end of February or early March. However, continuous bad weather conditions, poor visibility and heavy snowfall, that triggered avalanches, had delayed the opening. Finally, after efforts by Projects Beacon and Vijayak of BRO, connectivity was re-established on April 21 and 10 civil trucks, carrying essential fresh supplies, moved across the ZojiLa Pass towards Kargil, bringing much needed relief to the people of Ladakh. Lt. Gen. Rajeev Chaudhary, the BRO director-general, said the ZojiLa Pass’ reopening will facilitate the availability of essential goods and supplies for the people of Ladakh and also enable the easier movement of Army convoys.