India   All India  22 May 2017  BJP yet to decide on Prez candidate, ruled out Bhagwat's name: Amit Shah
India, All India

BJP yet to decide on Prez candidate, ruled out Bhagwat's name: Amit Shah

Amit Shah rules out RSS chief Bhagwat as Sangh itself has said ‘no’. 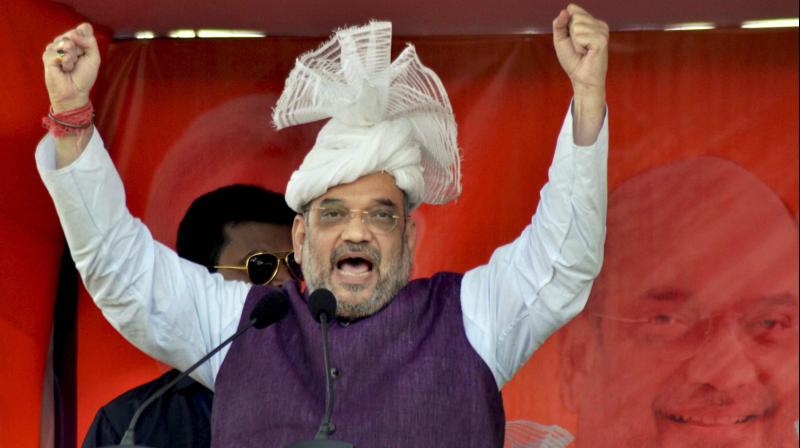 New Delhi: While the Opposition parties are now busy formulating their strategy to put up a joint candidate for the coming presidential election, the ruling BJP said Sunday it was yet to take a decision on its candidate. The BJP also virtually rejected ally Shiv Sena’s suggestion of RSS chief Mohan Bhagwat as the NDA candidate for the post.

Saying that the BJP had taken no decision yet on who would be the NDA’s presidential candidate, party chief Amit Shah said in an television interview: “Even if I have a name on my mind, it has to be discussed within the party first.” He also ruled out Mr Bhagwat’s name, saying the RSS had itself ruled out any such idea.

Suggestions for a second term for President Pranab Mukherjee have also come from some of the Opposition parties, but the government, sources say, is unlikley to agree. The Congress, the party to which Mr Mukherjee belonged before being elected to the top constitutional post, has also not officially reacted to this suggestion.

Congress president Sonia Gandhi herself held talks with NCP supremo Sharad Pawar, JD(U)’s Nitish Kumar, CPI(M)’s Sitaram Yechury, CPI’s D. Raja and West Bengal chief minister and TMC chief Mamata Banerjee on putting up a joint candidate for the post. Mrs Gandhi is likely to hold talks with some other leaders this week, including BSP supremo Mayawati. The Opposition camp is also trying to reach out to the Sena, whose ties with the BJP have been deteriorating.

However, the ruling NDA coalition seems to have the advantage after some non-NDA parties, including Jagan Mohan Reddy’s YSRCP and Telangana chief minister K. Chandrasekhar Rao’s Telangana Rashtra Samiti, sent out signals that they were ready to back the NDA candidate as the country’s next President. The AIADMK, Tamil Nadu’s ruling party, is also yet to declare its support.

The names of former West Bengal governor Gopalkrishna Gandhi, former Lok Sabha Speaker Meira Kumar and JD(U) veteran Sharad Yadav are doing the rounds as possible Opposition nominees. NCP supremo Sharad Pawar’s name, sources said, was also discussed by the Opposition camp, but the Maharashtra politician has said that he did not want to contest the poll.

The Opposition, sources said, wanted to put up a candidate who has impeccable secular credentials, and who could “maintain secular supervision of the Indian Constitution”.