India   All India  22 May 2017  Pigeons with Chinese tags lead to a stir in Arunachal Pradesh
India, All India

Pigeons with Chinese tags lead to a stir in Arunachal Pradesh

The sources didn’t rule out the possibility of China using these pigeons for surveillance of frontier areas and townships. 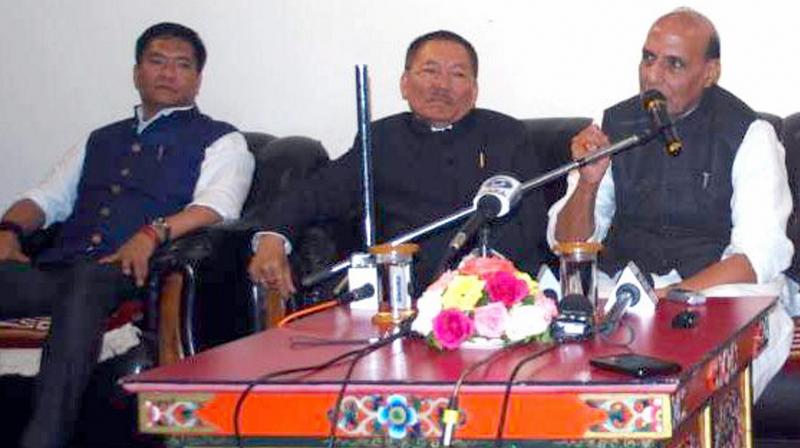 Union Home Minister Rajnath Singh addresses a press conference after chairing a review meeting of the Chief Ministers of five States on Indo-China Border Infrastructure and other issues, in Gangtok, Sikkim. (Photo: AP)

Guwahati: In what has created a sensation in the frontier state of Arunachal Pradesh, some villagers on Sunday caught pigeons with number tags written in Chinese at Anjaw along the Sino-Indian border.

The villagers who spotted the pigeons with the reported the issue to the local police and handed over the pigeons trapped by them. While it is not known if the pigeons were fitted with transmitters or spying equipment, security sources told this newspaper it had come to their notice and they are examining the tags. The sources didn’t  rule out the possibility of China using these pigeons for surveillance of frontier areas and townships.

It also comes close on the heels of India stepping up its defence preparedness along the Chinese border in Arunachal Pradesh following the frequent incidents of transgression by the People’s Liberation Army.

Pointing out that the security agencies had taken it very seriously and were examining all the possible aspects, the security sources said the Indian Army was prepared for any kind of eventuality along the border with China, and whenever there had been any Chinese Army transgression, the Indian Army has responded to it effectively.

Union home minister Rajnath Singh had on Sunday chaired the first-ever review meeting of Sino-Indian border infrastructure in Sikkim, that was also attended by the chief ministers and representatives of five Himalayan states bordering China, the sources said, adding the meeting was aimed at strengthening the infrastructure all along the Chinese border.

Arunachal chief minister Pema Khandu, who was at the meeting, raised serious concern over the migration of people away from border areas due to lack of basic facilities, and urged New Delhi to take effective steps to prevent it.

He, however, praised the Centre’s initiative to build frontier highways in the state to connect 11 districts bordering China. He said the highways would benefit the border people immensely, also defence personnel for movement along the border.