Police said section 144 of CrPc has been invoked in and around the Sterlite unit to provide security as per Madras HC orders. 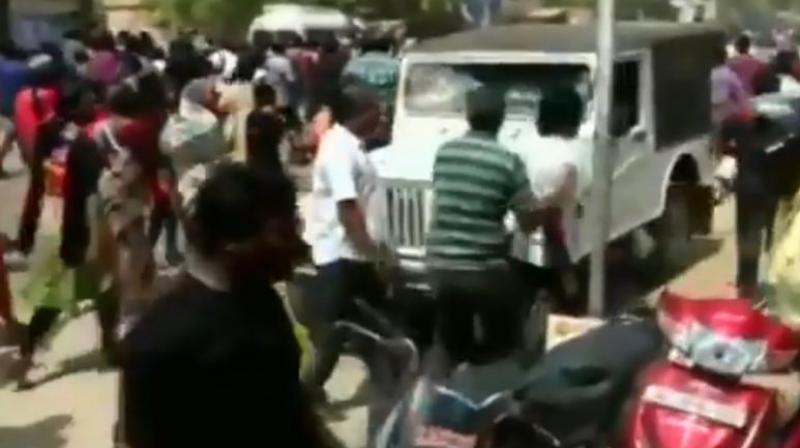 Angered over not being allowed to take out a rally the slogan-shouting protesters forcibly tried to push back the security personnel in riot gear. (Photo: ANI screengrab)

Tuticorin: At least 9 people, including a 16-year-old girl died when the month-long protest in Tamil Nadu’s where agitators are demanding closure of Vedanta's Sterlite Copper unit took a violent turn on Tuesday.

All the eight bodies of have been taken to Thoothukudi government medical college and hospital.

The agitators pelted stones and damaged police vehicles after they were prevented from marching towards the plant. Police barged into a hospital where some of the youth took refugee after hurling stones at the police. However, they escaped by scaling the backside wall.

Police said section 144 of CrPc has been invoked in and around the Sterlite unit to provide security to it as per the orders of the Madras High Court.

Angered over not being allowed to take out a rally the slogan-shouting protesters forcibly tried to push back the security personnel in riot gear.

In retaliation, the security personnel lobbed teargas shells to disperse the protesters.

Meanwhile, a peaceful demonstration was held near the old bus stand in the town, also demanding the closure of the Sterlite unit and the proposed expansion of the plant.

Several shops in this town, Srivaikundam and Oddapidaram remained shut in support of the protest, police said.

The district has been witnessing several protests by locals and others against the Sterlite Copper plant here and its proposed expansion.

Protesters have alleged that the plant was polluting ground water in their area.

Sterlite Copper represents the copper unit of Vedanta Limited which operates a 400,000 tonnes per annum-plant in Tuticorin.

#WATCH Protest held in Tuticorin demanding ban on Sterlite Industries, in wake of the pollution created by them #TamilNadu pic.twitter.com/23FWdj1do5