India   All India  22 May 2018  Chattisgarh: Villagers compelled to drink drain water in Dantewada
India, All India

Villagers of Dantewada are forced to dig out water from a drain and consume contaminated water every day. 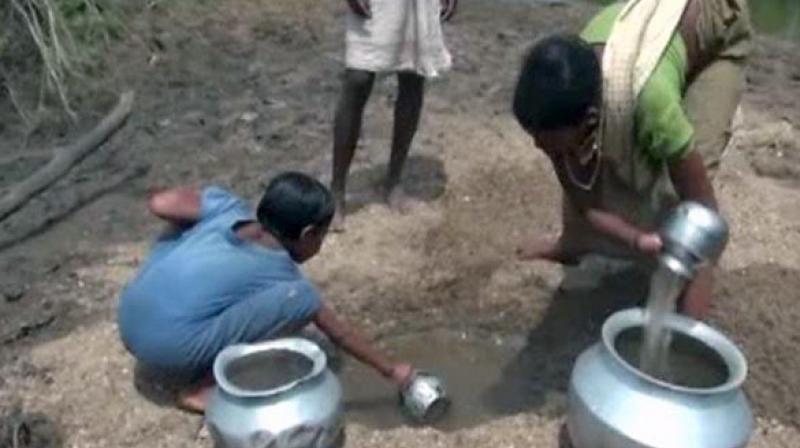 Villagers dig out almost blackened water and use it for their daily chores like cooking, washing and drinking. (Photo: ANI)

Dantewada: As temperatures continue to soar, reports of villagers scrambling for water across the country have come to the fore. The summers have also led to acute water shortage in many urban areas of the country.

The story is not any different for villagers of Chattisgarh's Dantewada district who have been deprived of drinking water. These villagers are forced to dig out water from a drain and consume contaminated water every day, reports news agency ANI.

Despite the villagers approaching the civic authorities no action has been taken to restore the water facility.

"The water is visibly murky; we cannot consume the water nor use it for cleaning, cooking and other basic needs," a local said.

Taking note of the issue, District Collector Saurabh Kumar assured help and said, "We will look into the matter, if there is a shortage of hand pumps then we will instal them soon."

In neighbouring Madhya Pradesh, the state is staring at an acute water shortage as 65 dams, out of 164 important reservoirs in the state, have almost dried up.

Besides the 65 dams which have almost dried up, 39 tanks have 10 per cent or less water stock of their capacity, a top official of the Madhya Pradesh Water Resources Department (MPWRD) said.

A new satellite study, released in March 2018, also warned of shrinking reservoirs in India, Morocco, Iraq and Spain which could result in water taps going completely dry in these four countries.