The sources said the Congress leadership would take a call on who would be its deputy chief minister. 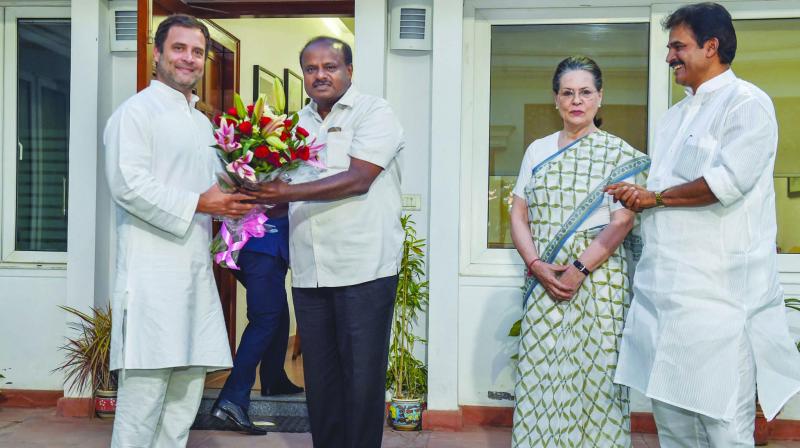 New Delhi: Karnataka’s chief minister-designate H.D. Kumaraswamy of the JD(S), who came here Monday for consultations with top Congress leaders ahead of his swearing-in, promised a stable government in Karnataka and a “long-term relationship” with the Congress, as he invited Sonia and Rahul Gandhi to his oath-taking in Bengaluru on Wednesday. Both are likely to attend the ceremony.

The top leadership of the two parties decided to make a new beginning, leaving behind the past, when they had come together and fallen apart, and vowed to ensure “a long-term relationship”.

The sources said the Congress leadership would take a call on who would be its deputy chief minister on Tuesday, when the leaders of the two parties meet in Bangaluru to work out modalities of power-sharing.

Only a few ministers are likely to take oath initially on Wednesday along with the chief minister, and other modalities would be worked out in the coming days. However, nominations for the Speaker’s post will be filed the same day and the Congress has staked its claim to the post, it being the larger party.

Mr Kumaraswamy was in New Delhi to express his gratitude to UPA chairperson Sonia Gandhi and Congress president Rahul Gandhi for supporting the formation of a JD(S)-led government in Karnataka.

Mr Kumaraswamy, who will be sworn in as chief minister on Wednesday for the second time in 12 years, flew into New Delhi on Monday afternoon and began his engagements with a meeting with pre-poll ally BSP supremo Mayawati. The BSP won one seat. Ms Mayawati is alos likely to attend the swearing-in.

During his 20-minute meeting with Sonia Gandhi and Rahul Gandhi, Mr Kumaraswamy is learnt to have discussed the nitty-gritty of Cabinet formation and the number of ministerial berths the Congress and the JD(S) would get. The meeting took place at Rahul Gandhi’s Tughlaq Lane residence.

The sources said at the meeting Mr Kumaraswamy promised to provide good governance in Karnataka and said he would seek Rahul Gandhi’s advice on all important issues. The Congress chief also extended his full support to the JD(S) chief for the “long-term relationship”.

“There is no bargain. We will cordially work out things. We must work together. I am here to take their (Congress leaders’) advice,” said Mr Kumaraswamy, when asked by reporters ahead of the meeting how the

Congress and the JD(S) will address the issue of ministry formation. Mr K.C. Venugopal, the AICC’s Karnataka in-charge, was also present at the meeting.

After the meeting, Mr Gandhi tweeted: “I had a warm and cordial meeting with Mr Kumaraswamyji. We discussed the political situation in Karnataka and other matters of mutual interest. I will be attending his swearing-in ceremony.”

Mr Venugopal will be travel to Bengaluru and hold a key meeting with Congress legislators on Tuesday ahead of the swearing-in. Insiders say a joint meeting of Congress and JD(S) legislators is also expected to be held on Tuesday. It will also be decided Tuesday if Mr Kumaraswamy will be sworn in alone or a small Cabinet including, the deputy CM, will take the oath. A decision on the Speaker will also be taken Tuesday.

There were unconfirmed reports that the coalition government would have 20 ministers from the Congress and 13 from the JD(S), the Congress being the larger party of the two. But not all these ministers would be sworn in initially, many would take the oath later.

Mr Kumaraswamy is expected to take the floor test within 24 hours after being sworn in. Both Congress and JD(S) MLAs will remain confined to their hotels till the floor test, some reports said.