8 boxes used for carrying VVPAT machines have been found at a shed in a village in Vijayapura district, 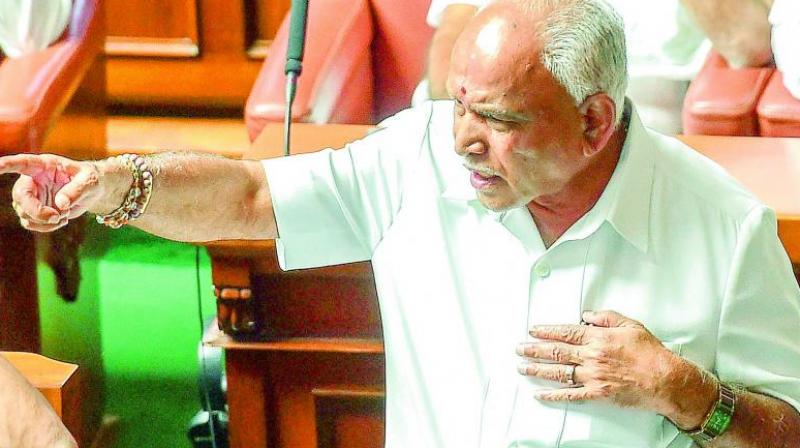 BJP state chief B S Yeddyurappa said it 'exposed the enormity of the irregularities in the elections.' (Photo: PTI | File)

Bengaluru: Eight boxes used for carrying Voter-Verifiable Paper Audit Trail (VVPAT) machines have been found at a temporary shed in a village in Karnataka's Vijayapura district, triggering a strong reaction from the BJP which said it indicated "grave irregularities" in conduct of the polls.

Reacting to the incident, BJP state chief B S Yeddyurappa said it "exposed the enormity of the irregularities in the elections." The state chief electoral officer (CEO) Sanjiv Kumar said on Monday the boxes used for carrying VVPAT machines, found in Managuli village on Sunday, do not belong to the district or to Election Commission.

"The boxes are without machine and paper and without unique electronic tracking number...the Election Commission will initiate strict action against those who are trying to create confusion," Kumar said, adding, no VVPAT machines were found. The Deputy Commissioner of the district and the Superintendent of Police conducted on the spot inspection on Monday following reports that empty boxes of VVPAT machines were spotted in the shed.

"These boxes do not belong to Vijayapura district and 2744 VVPATs allotted to the district are safely kept in the strong room," Kumar said.

An FIR has been registered at Managuli police station and investigation into the matter is on, the CEO said.

In a letter to the Chief Election Commissioner Om Prakash Rawat, Yeddyurappa said the Election Commission should take serious note of what he claimed were VVPAT machines and said it indicated "grave irregularities" in the conduct of assembly polls in the state.

"This incident has exposed the hollowness of the claim of the election commission that assembly elections in Karnataka were held in a free and free manner," Yeddyurappa said. He said during the election, prior to polling day, party leaders and workers had brought many such irregularities to the notice of the concerned officials but in vain.

Yeddyurappa alleged that in many assembly segments of Bidar and Kalaburagi districts, police officials themselves helped rival candidates to distribute money and liquor among the voters.

All the complaints of BJP and its leaders failed to make any impact on the officials, he said.

The election held on May 12 threw up a fractured mandate leading to a bitter political slugfest over government formation in the state.

BJP emerged as the single largest party, but fell eight short of majority. Governor Vajubhai Vala invited the BJP to form the government and Yeddyurappa was sworn in as chief minister on May 17. He resigned two days later without facing the floor test in an anti-climax to the political drama following the hung verdict.