India   All India  22 May 2018  On Twitter, minister puts out fitness challenge for countrymen, 3 celebrities
India, All India

On Twitter, minister puts out fitness challenge for countrymen, 3 celebrities 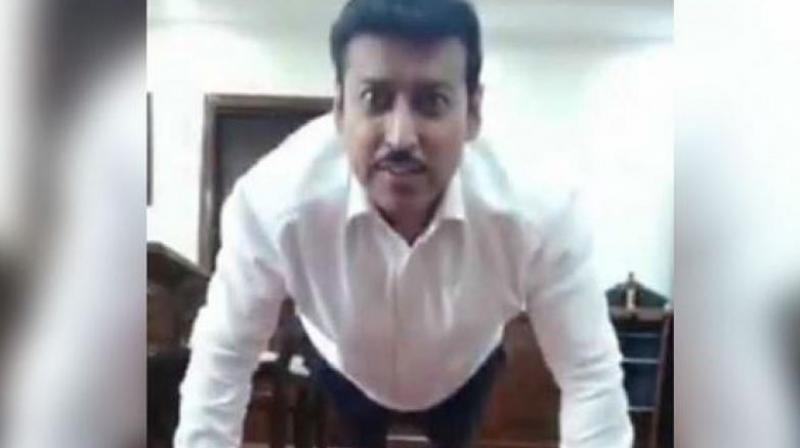 Union Minister Rajyavardhan Singh Rathore posted the video to urge everyone to shoot a video of their 'fitness mantra' and share it. (Twitter Screengrab | @Ra_THORe)

New Delhi: Union Minister Rajyavardhan Singh Rathore has posted a video on his Twitter where he gets on the floor of his office and does push-up without a pause as he continue to talk and interact with the viewers.

The Union Minister for Youth Affairs and Sports, who is also an Olympic medalist, posted the video to urge everyone to shoot a video of their "fitness mantra" and share it.

Post pictures and videos of how you keep yourself fit and send a #FitnessChallenge to your friends on social media. Here's my video 😀and I challenge @iHrithik, @imVkohli & @NSaina to join in🥊 pic.twitter.com/pYhRY1lNEm

Rajyavardhan Singh Rathore, who recently took charge of the Information and Broadcasting Ministry, starts the video by praising and complementing Prime Minister Narendra Modi, who is known for his long hours at work and his love for yoga. The minister called PM Modi an inspiration, praising his ability to manage a hectic schedule "effortlessly".

Dressed in his formal office wear, the ex-armyman does 10 push-ups without stopping and pausing, as part of the #HumFitTohIndiaFit campaign.

The BJP government has always been an advocate of fitness and has promoted Yoga extensively. The NaMo app has many 3D videos of Narendra Modi doing a number of asanas.