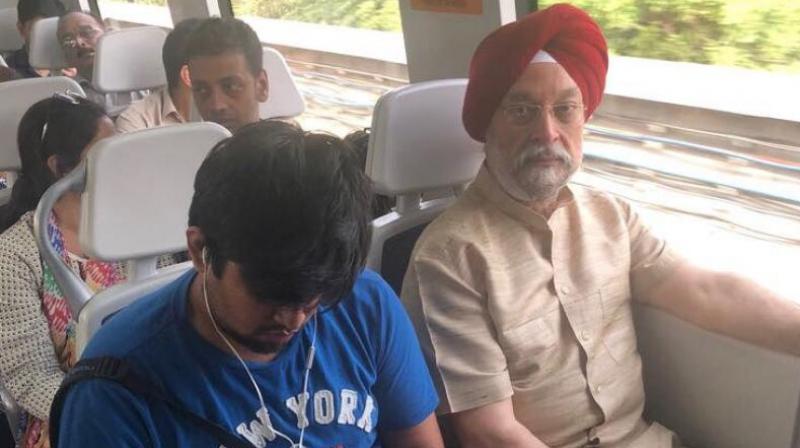 Minister of state for Union Affairs Hardeep Singh Puri tweeted his picture on the train with other passengers. (Photo: Twitter/@HardeepSPuri)

New Delhi: When Union Minister Hardeep Singh Puri got stuck in a huge traffic jam on his way to the airport on Tuesday morning, he hopped on to the Delhi Metro.

The minister was stuck near Dhaula Kuan and he did not want to miss his flight.

So, he decided to take a metro instead and was so impressed that he shared his review on Twitter.

The Minister of state for Union Affairs called the Delhi Metro a world class asset and tweeted his picture on the train with other passengers.

His tweet has been liked over 700 and also been retweeted over 100 times.

While on my way to the airport this morning I found myself stuck in the midst of a huge traffic jam near Dhaula Kuan.

Choice was to either miss the flight or hop on to the #Metro; so that’s what I did.

In March this year, the former diplomat had proposed the Delhi Metro to evolve a mechanism to offer special or discounted fares for students and senior citizens to offset the burden of fare hike on them that came into effect in 2017.

Puri, however, said the initiative should not be considered as “populist” and that it would be within the framework of the law.

The Delhi Metro fares were hiked by up to 100 per cent across multiple distance slabs in 2017 after two-phase fare hike effected in May and October on recommendation of the FFC, chaired by justice (retd) M L Mehta, which also had the Delhi chief secretary and the additional secretary of the Union ministry of urban development on board.