India   All India  22 Jun 2017  Presidential polls: As Opposition meet begins, here's a look at who stands where
India, All India

Presidential polls: As Opposition meet begins, here's a look at who stands where 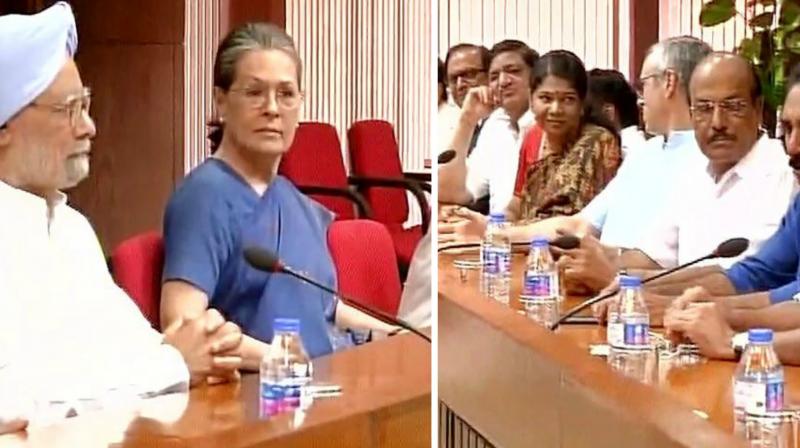 New Delhi: A meeting of the Opposition began on Thursday to decide its presidential candidate against NDA’s Ram Nath Kovind, whose nomination is touted to be a political masterstroke from the Bharatiya Janata Party.

While Left leaders have leaned towards nominating Gandhi or Ambedkar, Kumar’s visit to Congress’ chief Sonia Gandhi’s residence, a day before the meeting, has balanced scales for her.

The meeting and the decision assume significance as nomination of Kovind has revealed fissures in the Opposition’s armour. Kovind’s Dalit background has made him a candidate that political parties cannot afford to reject, even more so with his added credentials of being a crusader for the Scheduled castes and OBCs.

An example of this conundrum could be JD (U) president and Bihar CM Nitish Kumar was won over with the BJP’s smart move. He expressed ‘personal happiness’ initially and later declared his support to the candidate as well. He also decided to skip the meeting called by Sonia to choose the candidate on Thursday.

Similarly, the move also has pushed the Samajwadi Party, Rashtriya Janata Dal and the Bahujan Samajwadi party to the defence as they have chosen to wait and see who the Congress chooses as its candidate. It is likely that they might back Kovind if the candidate is not Dalit.

Congress: The Congress spurned the BJP’s appeal for consensus and said the Opposition would take a call on contesting the election on June 22.

Left: They are likely to nominate Gopal Krishna Gandhi or Prakash Ambedkar but a final decision will be taken after the Opposition party.

BSP: Mayawati said her party cannot take a negative stand against a Dalit. She, however, stopped short of supporting him.

Shiv Sena: After initially accusing the BJP of vote bank politics, the Sena later expressed support to their candidate, calling Kovind a ‘simple and decent human being’.

Trinamool Congress: Just because he was the leader of Dalit Morcha of BJP, they have made him the candidate, says Mamata Banerjee.

JD(U): Nitish Kumar expressed his support to Kovind on Thursday. However, he termed the support to BJP ‘one-off’ saying that the party will continue to ‘fight against central negligence’.

RJD:  After being left in the lurch by his ally Kumar, RJD chief Lalu Prasad Yadav is still ambivalent about backing BJP when his family is being investigated under its regime.