The AAP MLAs were protesting stopping of Sukhpal Khaira and LIP leader Simarjeet Singh Bains at the Assembly gate on Thursday. 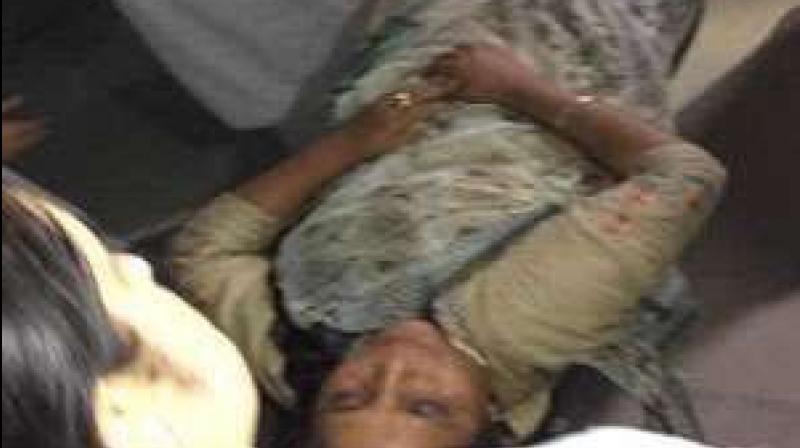 One of the female legislators lying on the floor after being pushed and thrown off guard by the marshals. (Photo: Twitter | ANI)

Chandigarh: Main opposition Aam Aadmi Party and ally Lok Insaaf Party (LIP) MLAs were physically removed out of the Punjab Assembly in Chandigarh on Thursday by the Marshals after they created a ruckus.

Last week, Khaira and Bains were suspended for rest of the budget session. The Speaker suspended the AAP MLAs present in the House and lone LIP legislator Balwinder Singh Bains, led by the leader of the opposition H S Phoolka, for the day after they disrupted Assembly proceedings by raising slogans and rushing to the Well.

Even the SAD MLAs including party president Sukhbir Singh Badal were named and suspended for the day by the Speaker after they created ruckus protesting the manner in which AAP legislators were physically removed from the House.

High drama was witnessed as the Speaker ordered that the AAP legislators and lone LIP MLA be taken out of the House, even as the opposition lawmakers jostled with the marshals.

In the commotion, the turban of one of the AAP MLAs allegedly came off. Later, Phoolka claimed that four of their legislators had also been injured as they were forcibly taken out. Shiromani Akali Dal (SAD) MLAs protested the Speaker's action against the AAP MLAs, alleging misbehaviour by the watch and ward staff.

Even female legislators like @BaljinderKaur_ were shoved & manhandled. All because they asked why Congressis were getting sand contracts. pic.twitter.com/sgwqT6YK8E

Earlier during Question Hour on Thursday, AAP MLAs protested against Khaira and Bains for not being allowed to enter assembly complex, with AAP senior leader Kanwar Sandhu raising the point.

They rushed to the Well of the House and raised slogans. AAP members tried to break human chain of watch and ward staff. Amid the din, Speaker named all the AAP and LIP MLA, directing marshals to take them away.

AAP MLAs were physically removed by marshals. Later on, the SAD and BJP MLAs staged walk out in protest against the removal of AAP MLAs from the Assembly. Afterwards when SAD and BJP members re-entered the House, SAD chief Sukhbir Badal protested against alleged removal of turban of a AAP MLA and said that even women members of the opposition who were named by the Speaker had been pushed around.

When the House re-assembled, the SAD MLAs protested the manner in which the AAP legislators were thrown out of the Assembly complex. SAD senior legislator and former Minister Bikram Singh Majithia was seen carrying turban of a MLA of AAP. He along with other SAD lawmakers including Sukhbir rushed to the Well of the House and raised slogans against the government.

As the ruckus continued, the Speaker named all the SAD MLAs including Sukhbir Badal, Majithia and Ajit Singh Kohar and directed marshals to take them out of the assembly.

The House was later adjourned for 15 minutes. Later, talking to reporters outside the Assembly, Sukhbir said, "if elected representatives are treated like this, imagine how this ruling party will behave with the common people". "The way turban came off, it is an insult of the entire Sikh community. We will move the National Minorities Commission and the National Commission for Scheduled Caste against the manner in which opposition legislators have been treated, turbans have come off and women members were mistreated."

Last week, Khaira was suspended after he uploaded a video of ruckus in the House on June 16 and went live on Facebook from inside the House. LIP's Bains was suspended on June 15 for hurling some papers towards the Chair. The two legislators held a dharna at the assembly gate on Thursday when they were not allowed to enter the Vidhan Sabha complex.