The actor-turned-politician took cognisance of the matter and assured her of action. 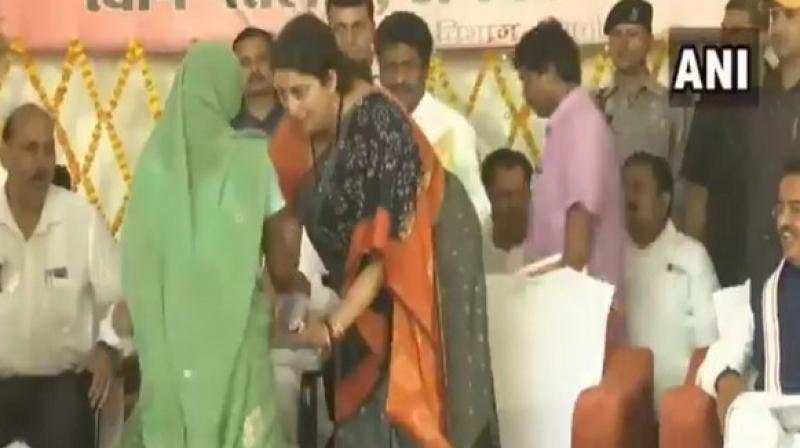 Amethi: A woman fell at the feet of Union Minister Smriti Irani while she was on the stage here on Saturday.

Irani, who is also the BJP MP from Amethi Lok Sabha seat, consoled the woman" who complained of land grabbing by family members.

The actor-turned-politician took cognisance of the matter and assured her of action.

Irani is in Amethi along with Goa Chief Minister Pramod Sawant to meet the family of Surendra Singh, a close aide of her and the former village head of Barauli, who was shot dead last month while he was asleep at his residence.

#WATCH Amethi: A local woman falls at the feet of Union Minister Smriti Irani on the stage, complaining of land grabbing by family members. Smriti Irani took cognizance of the matter and assured the woman of action. pic.twitter.com/FwR3pKZ3MW

The Amethi MP, who was visibly distraught on seeing Singh's body, had also lent a shoulder to his mortal remains during the last rites.

Later, while addressing a public rally here, Irani took a jibe at Congress president Rahul Gandhi, whom she had defeated in the general elections.

"A social revolution came here when everyone went to polling booths, pressed 'lotus' and gave a message that democracy has not been made for 'naamdaar' (dynast), Irani said.

"No one had imagined that a woman from a simple family will be given the opportunity to be your representative. In a region which was the stronghold of 'naamdaar', where it was believed that even if MP does not return for five years, people will accept him," she added.

Irani had defeated Gandhi from the high-prestige Amethi parliamentary constituency by 55,120 votes. The seat was considered a stronghold of the Nehru-Gandhi family.