Armed forces get free hand to open fire at LAC

Field officers can order firing under 'extraordinary circumstances'; China informed about the change in rules 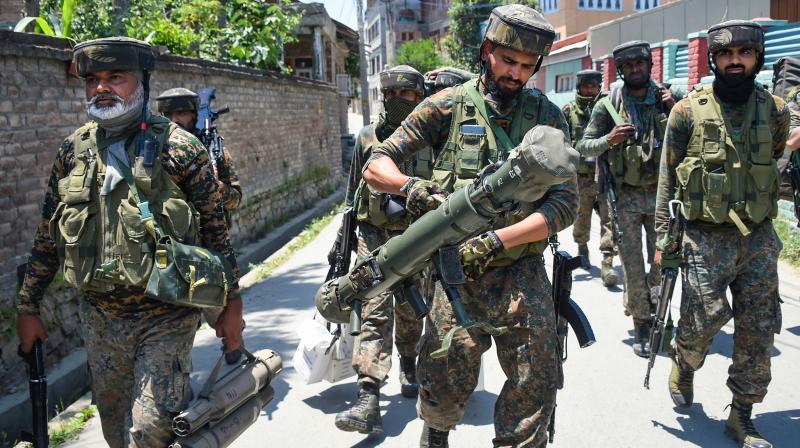 The Indian Army has changed its rules of engagement on the Line of Actual Control
with China, which will allow field commanders to order troops to use firearms under "extraordinary" circumstances. This follows the violent clash between Indian and Chinese soldiers on June 15, when 20 soldiers, including 16 Bihar’s commanding
officer Col. Santosh Babu, were killed.

Sources said the Chinese were informed about the change in the rules of engagement and that India will respond forcefully to any violence. Earlier, under the 1996 India-China agreement, Army and ITBP jawans did not carry loaded guns during patrolling and gun barrels were pointed downwards. Now commanders can use any weapon as they see fit during any aggression by Chinese troops.

Defence minister Rajnath Singh on Sunday met CDS Gen. Bipin Rawat and the Army,
Air Force and Navy chiefs to review situation along the LAC as the situation in Ladakh remained tense. Hardening its stance, India has given its armed forces deployed at the LAC full freedom, said sources. The armed forces have been asked to maintain strict vigil on all Chinese activities around the land border, airspace and in strategic sea lanes, and to adopt a tough line in tackling any Chinese misadventure.

Mr Singh, who will leave for Moscow on Monday, also discussed the arms and
ammunition requirements of the Indian forces. Mr Singh will attend the victory parade on June 24 marking the 75th anniversary of the Allied victory in World War II. A Chinese defence team will also visit Russia, and both Indian and Chinese soldiers will join the parade. Mr Singh is also expected to discuss defence purchases with Russia.

A PTI report, meanwhile, said the vice-chiefs of the three services have been given financial powers upto Rs 500 crores per project to acquire critical ammunition and weapons that will be needed if an all-out or limited conflict breaks out.

The Ladakh situation remains tense after the June 15 clash. Union minister and
former Army chief Gen. V.K. Singh said Saturday that more than double Chinese
soldiers were also killed. He also said India too had returned the Chinese soldiers who crossed over to the Indian side.