India   All India  22 Jul 2019  Chandrayaan-2: Everything you need to know about India's maiden Moon mission
India, All India

Chandrayaan-2: Everything you need to know about India's maiden Moon mission

To accomplish the voyage, it would take 54 days to land on the Moon through meticulously planned orbital phases. 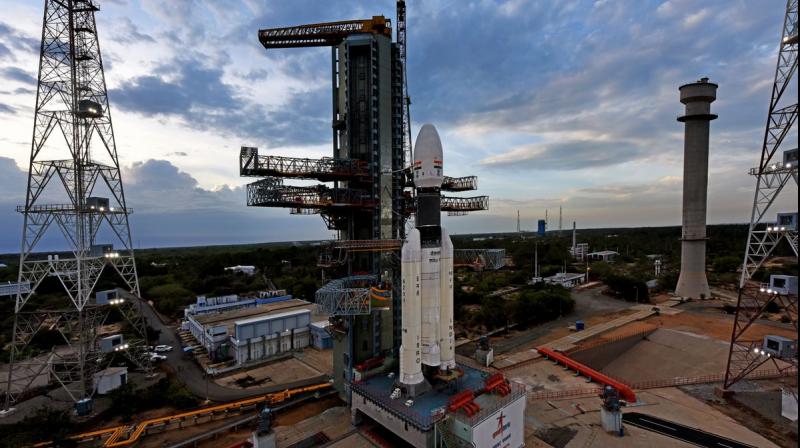 With this latest mission of ISRO, India would become the fourth country to land spacecraft on the Moon. (Photo: ISRO | Twitter)

Mumbai: Indian space agency ISRO's Moon mission, dubbed as Chandrayaan-2 will take off from Satish Dhawan Space Centre at Sriharikota at 02:43 pm on Monday. ISRO will launch its heavy-lift rocket GSLV-MkIII, three components, comprising an orbiter, the lander and the rover near the unexplored Lunar Southern Pole.

To accomplish the voyage, it would take 54 days to land on the Moon through meticulously planned orbital phases.

With this latest mission of ISRO, India would become the fourth country to land spacecraft on the Moon.

It is the Indian space agency’s most ambitious mission till date is aimed at exploring the south pole of the moon which holds maximum promise for the presence of water as well as of fossil footprints.

Chandrayaan-1 and the host of other satellite launches have been successful which has set the expectations from this mission quite high.

With Chandrayaan 2, in a first for India, ISRO will be depositing a lander and rover on the surface of the Moon.

It is an amalgamation of Chandra (Moon) and Yaan (Vehicle).

It is the second unmanned mission and was launched almost a decade after the first mission.

It comprises three modules which are The Orbiter, Vikram Lander and Pragyan Rover. It will be carrying 14 payloads: 8 on the Orbiter, 3 on Lander and 2 on Rover.

The lander and rover are expected to make a landing on the Moon on September 6.

ISRO has named the lander ‘Vikram’, after India’s space pioneer Vikram Sarabhai and rover 'Pragyan', which in Sanskrit means wisdom.

The heavy-lift rocket Geosynchronous Satellite Launch Vehicle - Mark III (GSLV Mk III), which will carry Chandryaan-2 to the Moon, is nicknamed as 'Baahubali'.

Objectives of the mission:

It is expected to make a soft landing on the unmapped surface of the Moon on the South Pole.

One of the primary objectives is to demonstrate the ability to soft-land on the lunar surface.

Scientifically, various experiments will be conducted. It would include the study of lunar topography, mineralogy, elemental abundance, the lunar exosphere and signs for hydroxyl.

The rover will also send photos of the lunar surface within 20 minutes of landing.

Duration of the mission:

The scientific experiments will be conducted for 14 days by the lander and rover. The Orbiter, however, will be operational for a year.

According to ISRO, India would be the fourth nation to attempt a soft landing.

It will be the first space mission to conduct a soft landing on the Moon's south polar region.

It is the first Indian lunar mission to land on Moon which was led by two women — mission director Ritu Karidhal and the project director Muthayya Vanitha.

Cost of the mission:

The total cost of building and testing the Chandrayaan-2 orbiter, lander and rover is Rs 603 crores, according to ISRO chief Dr Sivan.

The total cost of the Chandryaan-2, however, is around Rs 978 crore.

Why explore the South Pole of the Moon?

Firstly, it is not explored much. Secondly, a large section stays under the shadow of the North Pole.

There are speculations of water being present there.

Moreover, the South Pole is said to have cold parts which may contain fossilised information of the early Solar System.