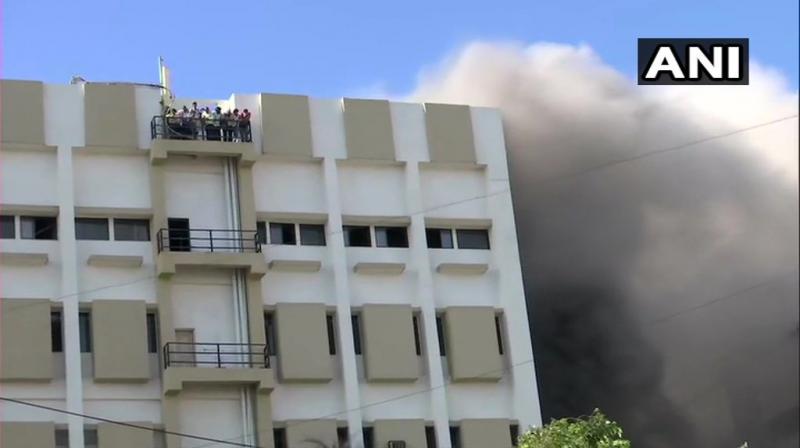 Almost a 100 people are estimated to be trapped in the building. (Photo: ANI)

Mumbai: A major fire has been reported at the Mahanagar Telephone Nigam LTD (MTNL) building in Mumbai’s Bandra West at 3:10 pm on Monday. While no injuries have been reported yet, almost a hundred people are estimated to be trapped on upper floors of the ten-storey building.

Almost 60 people have been rescued from the building by Mumbai Fire Brigade, reported by ANI.

The fire occurred at the third and fourth floor of the building.

Mumbai: Fire fighting operations underway in Bandra where a level 4 fire has broken out in MTNL (Mahanagar Telephone Nigam Limited) building. 14 fire tenders are present. People trapped in the building are being evacuated, approximately 100 people are reportedly trapped. pic.twitter.com/d1satP1byT

Fire fighting is underway and 14 fire engines from the Mumbai Fire Brigade, one quick response vehicle, an ambulance and six water tankers are on the scene. Mumbai Fire Brigade is taking the help of the newly introduced robot to douse the fire.

Mumbai: People trapped in MTNL (Mahanagar Telephone Nigam Limited) building in Bandra, are being evacuated. A level 4 fire has broken in the building, 14 fire tenders are present at the spot. pic.twitter.com/v5M3lfRWVd

Mumbai Fire Brigade is taking the help of the newly introduced robot to douse the fire at the MTNL (Mahanagar Telephone Nigam Limited) building in Bandra. pic.twitter.com/94DdzWdgz4

Officials are trying to rescue trapped people in batches of six-to-seven people via cranes.Visuals show trapped people screaming for help as smoke spreads in the building.