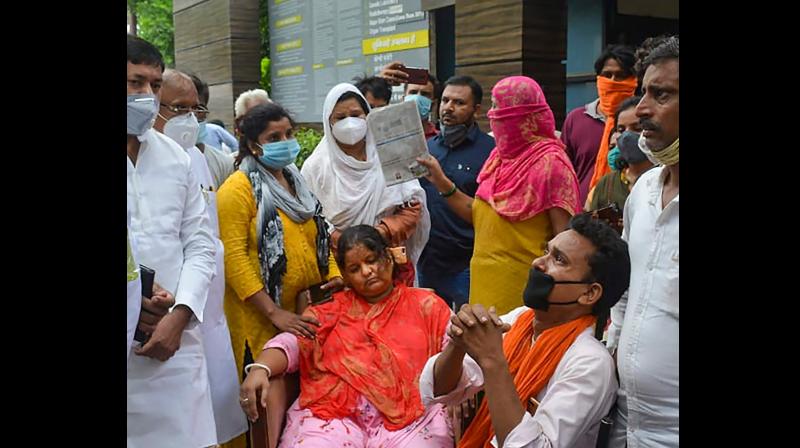 Ghaziabad: Family members of journalist Vikram Joshi stage a protest demanding justice for him, in Ghaziabad, Wednesday, July 22, 2020. Joshi, who was shot at by miscreants in Ghaziabad Monday night, died at a hospital Wednesday morning. (PTI)

Ghaziabad-based journalist Vikram Joshi, who was shot in the head by some assailants, succumbed to injuries early Wednesday. His death has evoked a sharp response from media bodies who condemned the attack on Joshi and demanded a judicial probe into it as well as other incidents of assault on scribes in Uttar Pradesh.

Joshi, who worked with a local daily, had lodged a complaint with the police alleging harassment of his niece on July 16 and was shot at around 10.30 pm on Monday near his home in Vijay Nagar area, according to officials.

Yes, he (Vikram Joshi) is no more. He passed away at around 4 am during treatment at the hospital, a family member told PTI. Joshi was admitted to a private hospital in the city.

However, Joshi's nephew told ANI that the family will not accept body of the journalist till the main accused is not caught. "Some boys including Kamal-ud-Din’s son used to eve-tease my sister. It was her birthday when incident occured. My uncle was coming home with her when Kamal-ud-Din’s son attacked him and shot him. We'll not accept my uncle's body till main accused is caught," Joshi's nephew said.

Senior Superintendent of Police Kalanidhi Naithani said nine assailants were nabbed on Tuesday and Pratap Vihar police post incharge Raghvendra Singh was suspended with immediate effect for dereliction of duty as he did not pay heed to the harassment complaint lodged by Joshi on July 16.

Shahnoon and Akash have been arrested while Ravi is still absconding, the police said. Besides them, the police has also arrested seven men identified as Mohit, Dalbir, Yogendra, Shaqir, two men who go by the same name of Abhishek, and another accused Akash (besides the one who was named in the FIR), the officials said.

Police has registered an FIR on the basis of a complaint by Joshi's brother Aniket Joshi, who also alleged that his journalist brother was given a life threat by the accused men.

The senior superintendent of police said Ravi, Akash and Shahnoor are bookies and were operating in Mata colony area due to which stakeholders used to come there. Joshi had raised objections to the illegal betting on July 16, following which he had heated arguments with the accused that ended up in a scuffle. "Ravi had received injuries in the incident and from that day he was planning to take a revenge from Joshi," he said.

What happened on the night of July 16

A CCTV footage of the incident that has surfaced on social media purportedly shows Joshi's two-wheeler swerving before falling down and him getting attacked by the armed group of men.

His daughters ran away to some distance, while the men caught hold of Joshi and started thrashing him. Suddenly, one of them opened fire and Joshi fell on the ground. The accused fled the spot, while his elder daughter rushed back to him and sat next to him on the road looking for help, the purported footage showed.

Observing that attack on journalists, especially in Uttar Pradesh, has been increasing in the recent times, the Press Association and the Indian Women's Press Corps (IWPC) demanded that the Uttar Pradesh government bring to book all the culprits in the attack on Joshi as well as in other assault on scribes in the state.

"We observe that attack on journalists, especially in Uttar Pradesh, is increasing in recent times. At the same time, no concrete action has been taken by the state government in many of the cases," the Press Association and IWPC said in a joint statement.

"We demand that all the culprits in this case as well as in previous cases must be brought to book by launching a 'special operation' by the state government," they said. The two media bodies also demanded adequate financial help for the bereaved family of Joshi.

More importantly, considering the past record of murderous attacks on the next of kin of the victims in Uttar Pradesh, the state government must provide adequate security to the members of Joshi's family, the statement said.

"We understand that nine accused have been arrested and the station in-charge has been suspended with the initiation of departmental inquiry after the family of the journalist alleged inaction by the police. But these are not enough to bring out the truths and bring the culprits to book," the Press Association and IWPC said.

Many senior journalists have condemned the killing on Twitter.

Investigative journalist Rohini Singh, who works with The Wire, tweeted that nobody is safe in the state.

NDTV journalist Sanket Upadhyay questioned the silence of the media fraternity over the killing.

The loud silence of journalists. On the killing of a journalist in Uttar Pradesh.

Senior journalist Rajdeep Sardesai noted the rise of gun culture in the state of Uttar Pradesh while condemning the killing.

UP journalist Vikram Joshi who was shot at in Ghaziabad after he complained against those who were harassing his niece has passed away this morning. RIP The rampant use of guns in UP remains a major concern: ‘wild west’ UP!