Special Parliament book on Atal Bihari Vajpayee on the cards?

Now with the passing away of Vajpayee on August 16 and with the NDA dispensation keen to promote him as a national icon. 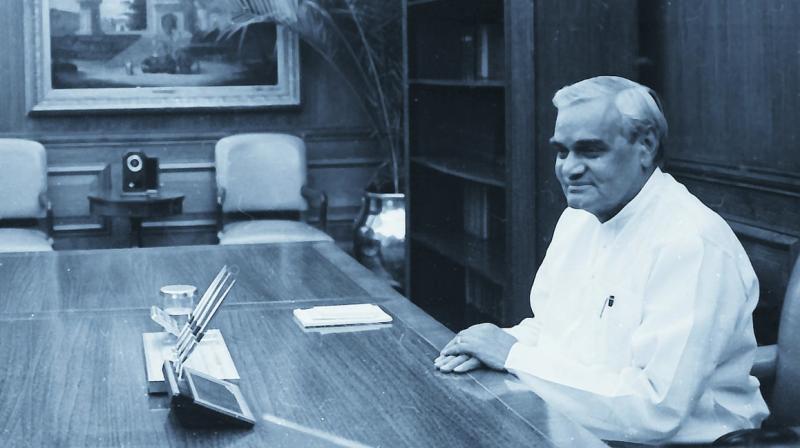 New Delhi: In order to keep the legacy of former Prime Minister Atal Bihari Vajpayee alive, Parliament is pondering over a proposal on bringing out a commemorative volume on the veteran BJP leader. While it is a common practice for the research division of the Parliament to publish such works on former MPs, the recent demise of the ex-PM could precipitate the process because the NDA dispensation is keen to commemorate the achievements of Vajpayee as a parliamentarian.

Sources privy to the developments told this newspaper that the research wing, which falls under the jurisdiction of Parliament’s library, internally moves a proposal to publish commemorative volumes on leaders who have been members of either Lok Sabha or Rajya Sabha. This proposal is formally moved by a Parliamentary panel (consisting of officials as well as MPs) once the member (serving or retired) has passed away.

In December 2016, the research division had come out with a commemorative volume on another former Prime Minister Chandra Shekhar.

These volumes comprise speeches of leaders given in Parliament, their interventions during discussions and their overall experience as parliamentarians.

Sources added that they source all information through parliamentary archives and also seek help from leaders, family members and political colleagues.of the parliamentarian on whom the volume is being published.

Now with the passing away of Vajpayee on August 16 and with the NDA dispensation keen to promote him as a national icon, there is a strong likelihood that Parliament could soon start work on a commemorative volume on him.

With immense quantity of archival material available on the former prime minister, who was a master orator and poet, sources said that the volume could be quite popular among readers and enthusiasts of India’s Parliamentary history.

Considering his popularity, sources also said that once work starts on the volume, contributions from his family, top leaders of the BJP as well as other parties could pour in, thus making the exercise quite extensive yet interesting.

The research division of Parliament brings out a large number of important publications, monographs, booklets, and brochures from time to time, delineating the various aspects of parliamentary functioning and also on parliamentary practices and procedures.