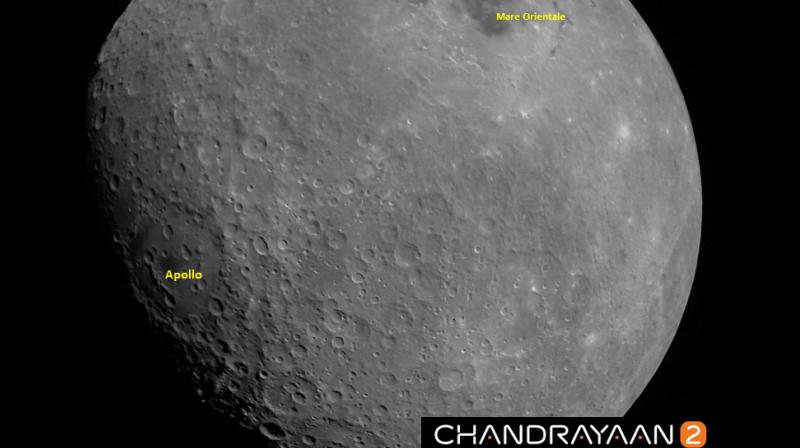 The Apollo is a 538 km-wide crater named after NASA's Apollo moon missions and it is located on the moon's southern hemisphere. The Mare Orientale, on the other hand, is said to be over 3 billion years old and about 950 km wide. (Photo: ISRO | Twitter)

New Delhi: Indian Space Research Organisation (ISRO) released on Twitter the first image of the moon taken by Chandrayaan-2, on Thursday. The image of the moon, ISRO says, was captured at a height of about 2,650 km from the moon surface and was taken on Wednesday.

The image shows two major landmarks on the moon, the Apollo crater and the Mare Orientale basin.

Take a look at the first Moon image captured by #Chandrayaan2 #VikramLander taken at a height of about 2650 km from Lunar surface on August 21, 2019.

Mare Orientale basin and Apollo craters are identified in the picture.#ISRO pic.twitter.com/ZEoLnSlATQ

The Apollo is a 538 km-wide crater named after NASA's Apollo moon missions and it is located on the moon's southern hemisphere. The Mare Orientale, on the other hand, is said to be over 3 billion years old and about 950 km wide.

The Chandrayaan 2, is firmly on its journey to the moon, having successfully pulled off the critical second lunar orbit manoeuvre on Wednesday, taking it a step closer to the moon. ISRO had said it to be one of the trickiest in the mission, the 20-minute manoeuvre, if unsuccessful, would have resulted in the mission bouncing off into deep space.

The next Lunar bound orbit manoeuvre is scheduled on August 28, 2019 between 0530 - 0630 hrs IST. The final test for the Chandrayaan 2 is scheduled for September 7, which will have the mission landing on the moon's south pole.

If successful, India will lay claim to being the fourth nation to soft land a rover on the lunar surface after Russia, US and China. Israel had earlier attempted to do the same with their Beresheet spacecraft, but was unsuccessful, after it crash landed on the moon earlier this year.

The process of landing Chandrayaan 2 on the moon is very complex since it blasted off at a velocity of 39,240 kilometres per hour, which is almost 30 times the speed at which sound travels through air.