The MNS leader reached the ED office around 11.30 am, accompanied by wife Sharmila, son Amit and daughter in law Mitali. 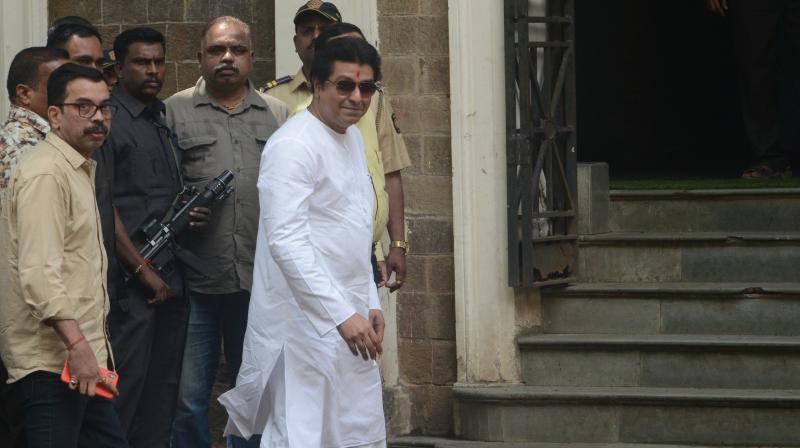 Mumbai: MNS chief Raj Thackeray, summoned by the Enforcement Directorate (ED) in a money laundering case, on Thursday reached the agency's office in south Mumbai with his family members in tow. The MNS leader reached the ED office around 11.30 am, accompanied by wife Sharmila, son Amit and daughter in law Mitali.

After Raj entered the office alone, his family members camped at a nearby hotel. The ED has summoned Raj in a case pertaining to alleged irregularities related to Infrastructure Leasing and Financial Services (IL&FS) loan to Kohinoor CTNL.

Mumbai police imposed section 144 of CrPC (banning unlawful assembly) outside the ED office and in some parts of Dadar, where the MNS chief resides and parts of central Mumbai. The move was taken apprehending law and order problem, a police official said.

"Raj has appealed his party workers not to throng outside the ED office but we don't want to take any chances," the official said.

Meanwhile, MNS leader Sandeep Deshpande, wearing a tee shirt with "EDiot Hitler" was taken into custody by police Thursday morning. The tee shirt also had the Nazis' principal symbol the hakenkreuz, "hooked-cross" (which resembles the Swastika) printed on it.

MNS workers Santosh Dhuri and Rajan More were detained from Mumbai and Thane respectively. "We have imposed section 144 of Criminal Procedure Code under the jurisdiction of Mata Ramabai Ambedkar Marg Police Station, where the ED office is located," the official said.

Section 144 prohibits assembly of more than four persons in an area where there is likelihood of breach of peace and disturbance of public tranquility, he said.

Police personnel have been deployed in Dadar area in central Mumbai and other places where MNS has stronghold, to maintain law and order, the official said. Mumbai police on Wednesday served notices to MNS functionaries and several party workers under section 149 of CrPC as a precautionary measure, he said.

Section 149 pertains to prevention of cognisable offences. The ED is probing alleged irregularities relating to loans and equity investment worth over Rs 450 crore by IL&FS in Kohinoor CTNL Infrastructure Company, which is developing Kohinoor Square tower in Mumbai's Dadar area. Former Maharashtra chief minister and senior Shiv Sena leader Manohar Joshi's son Unmesh Joshi was also summoned by the ED in this case.