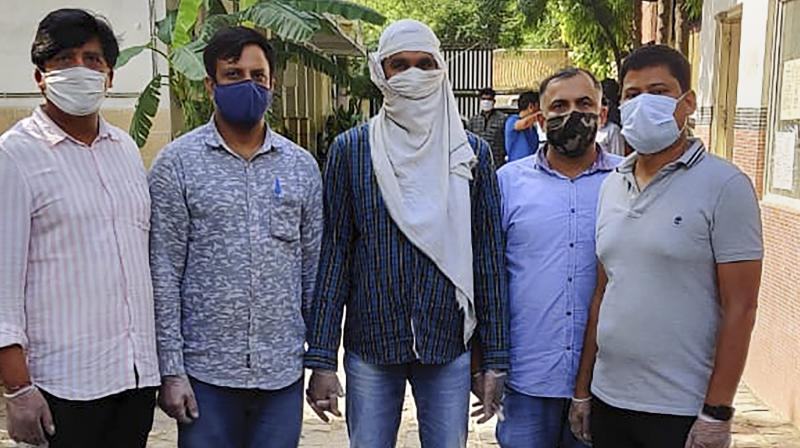 New Delhi: A major terror strike was averted with the arrest of a suspected operative of the ISIS, armed with two pressure cooker IEDS, from central Delhi's Ridge Road area following a brief exchange of fire, Delhi Police officials said on Saturday.

Mustakeem Khan, alias Abu Yusuf, a resident of a village in Uttar Pradesh's Balarampur district, who was under watch for over a year, planned to carry out a lone wolf strike at a high footfall area in the national capital, said P S Kushwah, DCP (Special Cell).

Khan, who was on a motorcycle, was caught on Friday night after a brief exchange of fire on the section of the Ridge Road between Dhaula Kuan and Karol Bagh.

The two IEDS he was found with were fully ready and just needed to be activated with a timer, police said. Security was stepped up in the national capital and in neighbouring Uttar Pradesh following the arrest.

Khan had planned to strike in the national capital on August 15, but could not do so due to heavy security arrangements, Kushwah said.

Khan was to come to Delhi around August 15 to carry out terror strikes Now, he felt the security could be lax so he could come here. But he was nabbed, he told reporters.

He planned to use the pressure cooker IEDS in a heavy footfall area of the city, the police official said.

After planting IEDs, his plan was to wait for fresh instructions and then the next plan was to carry out fidayeen attacks. But he was not told about when and where the strike was to be carried out. A terror strike has been averted due to this operation," Kushwah added.

Khan was under the watch of the security agencies for the last year, the police official told reporters.

We had been conducting surveillance on him through sources. We also found he was in touch with ISIS and directly in touch with its commanders.

Giving details, he said Khan was first handled by Yusuf-al Hindi who was killed in Syria. After that he was handled by Abu Huzefa, a Pakistani, who was killed in a drone strike in Afghanistan. Later, another handler instructed him to carry out "lone wolf" strikes, the police official said.

"It is for the same purpose that he had come to Delhi. Besides two pressure cookers IEDs, we also recovered a sophisticated pistol, four cartridges, and the motorcycle. We suspect the motorcycle could be a stolen one, he added

The suspected ISIS terrorist had also prepared a fidayeen vest for a suicide attack and had tested smaller devices near the burial ground in his village, police said.

Investigations are on to find when he made the pressure cooker IEDs or whether someone gave them to him.

A bomb disposal team of the National Security Guard (NSG) reached the spot along with a robot to help pick up a bomb or an IED and a TCV (total containment vessel) vehicle used to defuse a bomb in a controlled environment.

Following the arrest, Uttar Pradesh Director General of Police Hitesh Chandra Awasthi sounded an alert in the state and asked all police officers, especially those in field posting, to remain vigilant and take necessary precautions.

In addition, security checks were intensified along the Delhi border in Uttar Pradesh's Noida.

Vehicles and passengers moving to and from Delhi were being checked at the border, while Gautam Buddh Nagar district was also on alert mode, Noida Deputy Commissioner of Police Rajesh S said.

According to the court sources, the accused was produced before Chief Metropolitan Magistrate Pawan Singh Rajawat and the Delhi Police sought eight days' custody.

During in-camera proceedings, the police told the court that custodial interrogation of the accused was required to unearth the larger conspiracy, the sources said.

The court allowed the plea and directed them to produce the accused before it on August 30.