India airlifts 392 from Afghanistan, more evacuation flights on the way

With Sunday’s evacuation, the number of people brought back by India from Kabul reached around 590 since last Monday 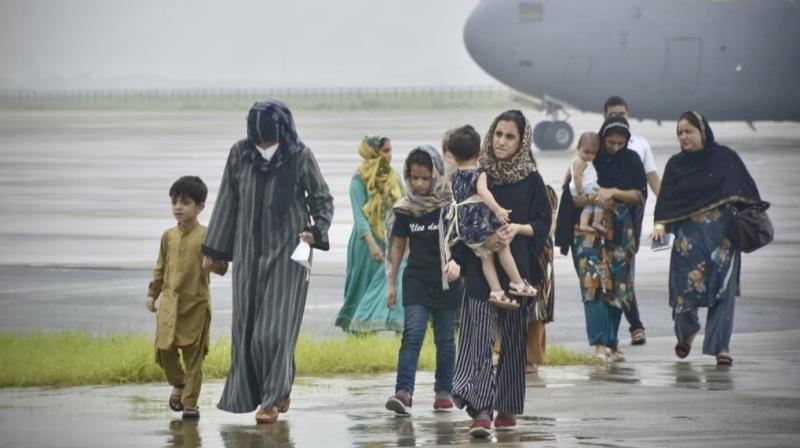 New Delhi: India on Sunday brought back home at least 392 people, including two Afghan legislators and several Afghan Hindus and Sikhs, on three different flights as part of its mission to evacuate Indians and its Afghan partners from Kabul amid the increasing Taliban hostility and the deteriorating security situation in the city after it fell to the militant outfit a week ago.

On Sunday morning, India evacuated 168 people -- including 107 Indians and 23 Afghan Sikhs and Hindus -- from Kabul in the C-17 heavy-lift military transport aircraft of the Indian Air Force. In addition to this, a group of 87 Indians were brought from Dushanbe in Tajikistan and 135 Indians were flown in from Doha late on Saturday night. These 135 had earlier been flown to Doha by US and Nato military aircraft. The Indian government is flooded with long-term visa queries and requests for evacuation from both Indian and Afghan nationals.

Separately, 146 Indian nationals, who were evacuated from Afghanistan to Doha, Qatar, are being repatriated to India Sunday night, the Indian embassy in Qatar said on Sunday evening.

According to sources, the special help desk set up for Afghanistan rescue and evacuation is inundated with calls, emails and WhatsApp messages requesting evacuation. In the past five days, ever since the crisis has begun, the Afghan special desk has got over 2,000 calls, around 6,000 WhatsApp messages and over 1,200 emails from both Indians and Afghans. Besides this, sources said, there have been multiple calls and emails to rescue a single person, which the MEA team is very patiently dealing with.

A sense of relief and gratitude was palpable among the Afghanistan evacuees as they landed at the Hindon Air Force Station at Ghaziabad, UP, on Sunday morning, after days of uncertainty following Kabul’s fall to the Taliban. The group included Afghan legislators Anarkali Honaryar and Narender Singh Khalsa and their families. Calling India his “second home”, Mr Khalsa narrated his horror story which unfolded as their vehicle was separated from a convoy of those being taken to the Kabul airport for rescue. He broke down as he reached India. “I feel like crying… Everything that was built in the last 20 years is now finished. It’s zero now,” he said. “Even if we are Afghans and lived in that country, people often call us Hindustanis. I thank India for extending its helping hand,” Mr Khalsa told reporters at Hindon.

Among the evacuees was an infant who travelled without a passport. The passengers had to undergo a RT-PCR test for Covid-19 and were given oral polio vaccine doses as the polio virus has not yet been eradicated in Afghanistan, Pakistan and Nigeria, though it is no longer there in most nations in the world. “We decided to vaccinate the Afghanistan returnees with free polio vaccines -- OPV & fIPV -- as a preventive measure against the wild polio virus,” tweeted health minister Mansukh Mandaviya.

Afghanistan’s ambassador to India Farid Mamundzay thanked Indian friends for their messages of support, saying: “I appreciate the kind words of sympathy and support messages from all Indian friends and the diplomatic missions in New Delhi over the suffering of Afghans in the past few weeks, particularly the last 7-8 days.” He tweeted: “The avoidable suffering of Afghanistan is man-made and at a scale beyond all civilised contemplation. Afghanistan is going through a difficult time, and only good leadership, compassionate attitude and international support to the Afghan people would somewhat bring an end to these miseries.”

It is learnt that a small group of Indian officials is coordinating the evacuation efforts at the Kabul airport, and another batch of Indians is expected to be brought back from the Afghan capital on Monday. It will, however, depend on whether a sizeable number of Indians, as well as Indian-origin people, manage to reach the airport. People familiar with the situation in Kabul said Afghan nationals who have Indian visas are facing increasing scrutiny from the Taliban, particularly at checkpoints on the way to the airport.

It is learnt the Indians evacuated to Doha from Kabul were employees of a number of foreign companies operating in Afghanistan.

With Sunday’s evacuation, the number of people brought back by India from Kabul reached around 590 since last Monday. Two days after the Taliban seized control of Kabul on August 15, India evacuated 200 people, including the Indian ambassador and other staffers of its embassy in Kabul, in two C-17 heavy-lift transport aircraft of the IAF.