India   All India  22 Sep 2017  We have no links to ISIS, are peace-loving people: Rohingyas to SC
India, All India

We have no links to ISIS, are peace-loving people: Rohingyas to SC

The Centre has maintained its stand saying that the 40,000 Rohingyas should be deported to Myanmar as they they are illegal immigrants. 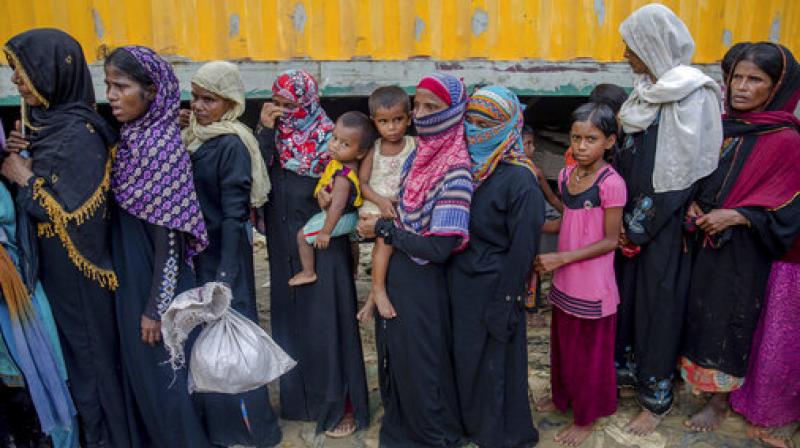 More than 420,000 Rohingya refugees have fled from Myanmar to Bangladesh in less than a month, with most ending up in camps in the Bangladeshi district of Cox's Bazar, which already had hundreds of thousands of Rohingya refugees who had fled prior rounds of violence in Myanmar. (Photo: AP)

New Delhi: Rohingya Muslims, who had taken refuge in India, have denied in the Supreme Court the Centre’s charge that they have links with terrorist organisations. They made it clear that they were not linked to the ISIS nor are being radicalised by terror elements.

The Centre has maintained its stand saying that the 40,000 Rohingyas should be deported to Myanmar as they they are illegal immigrants and have terrorist connections.

Read: Rohingyas illegal immigrants, not against law to deport them: Rajnath Singh

In reply to this, the petitioners Mohammed Salimulla and others in an affidavit said that there are a number of Rohingya Muslims who are peace loving and have no connection whatsoever with any criminal activity – much less “terrorist” activity. The matter comes up for further hearing on October 3.

They said that the Minister of State’s totally arbitrary and discriminatory circular dated 8th August, 2017 addressed to all States that they should be deported has put them in grave danger and in jeopardy of their life and liberty; “life” because if summarily deported to Myanmar they will be subjected to torture and even death.

They quoted a statement of the Chief Minister of Jammu and Kashmir in the Assembly denying that Rohingyas have terrorist links.

They also pointed out that in the case of Sri Lankan refugees, the government had put in place a screening mechanism to identify those associated with LTTE (whom India had declared as a terrorist organisation) or having a criminal record and had put them in special camps.

Read: Centre takes back affidavit in SC on Rohingyas

The handbook of Department of Rehabilitation, Government of Tamil Nadu, describes how Srilankan Tamils refugees were screened and intelligence departments conducted enquiries at the Quarantine camp with newly arriving refugees.

After ensuring that they do not belong to any militant groups/movement, they are permitted to stay in the regular camp at Mandapam.

It was pointed out that the Centre issued a notification in 2015 to grant asylum to other religious groups and the absence of Muslims in the list of those being granted exemption was clearly discriminatory.

It had excluded Muslim refugees, from the Rohingya Community in Myanmar that fled persecution, from the class of foreigners who are granted exemption from the application of provisions of the Foreigners Act, 1946 and the Passport (Entry into India Rules), 1950.

It is submitted that, on September 19, 2016, India participated in the high level plenary discussions that led to the adoption of the “New York Declaration for Refugees and Migrants” by the UN General Assembly.

The New York Declaration reaffirms the importance of the international refugee regime and represents a commitment by Member States to strengthen and enhance mechanisms to protect people on the move.

It is noteworthy that all the Member States reached agreement by consensus on the Declaration that strived to address a solution for large movements of refugees and migrants in the recent times.

India’s participation in this declaration contradicts the government’s current stand on extending protection to persecuted communities.

Thus the Rohingya Community have come to India are refugees and have fled Myanmar because of severe repression and genocide.

Even their houses have been burnt and therefore they are not mere illegal migrants. They are thus entitled to protection under various international conventions, which India has signed and ratified, they said and prayed for a stay on their deportation.