The bail application of Bishop Mulakkal has been dismissed by the Magistrate Court, Pala on Saturday afternoon. 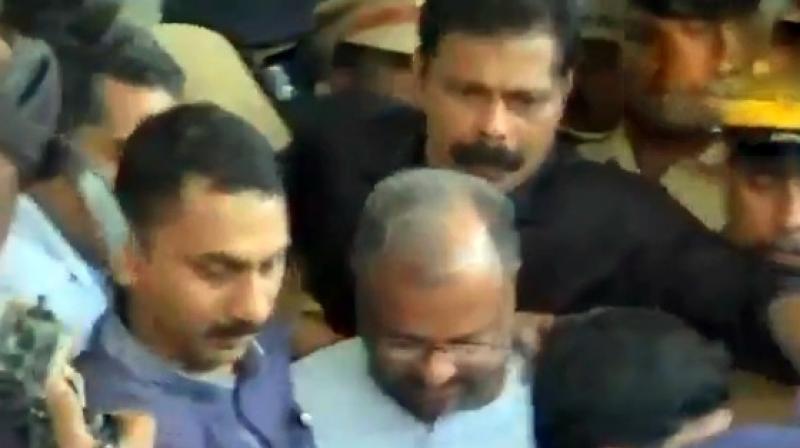 Police team interrogated the bishop for three consecutive days from September 19 before arresting him on Friday. (Photo: Screengrab | ANI)

Kochi: Bishop Franco Mulakkal, who was arrested on Friday for allegedly raping a Kerala nun repeatedly between 2014 and 2016, has been sent to police custody till September 24.

The bail application of Bishop Mulakkal has been dismissed by the Magistrate Court, Pala on Saturday afternoon.

Police team interrogated the bishop for three consecutive days from September 19 before arresting him on Friday.

Bishop Mulakkal, who had complained of chest pain and uneasiness while being taken to Kottayam Police club from the Crime Branch office in Thrippunithura in Ernakulam district in Kochi on Friday night, was admitted to the Cardiology department of Kottayam Government Medical Colleges.

He was discharged on Saturday morning after which the police took the custody of the accused bishop. He was then produced before the court.

In the court on Saturday, Mulakkal’s lawyer failed a bail plea and had also put forward a condition that his blood samples and saliva should not be taken without his permission citing that it can be misused.

Kerala police in its remand report to the court on nun rape case said “Bishop Franco Mulakkal came to the convent with the intention of sexually assaulting the victim. On May 5, 2014, he illegally confined her in room no. 20 of the guest house at around 10:48 pm and subjected her to unnatural sexual assault.”

Reports said that while Mulakkal, during police interrogation, stuck to his claim that he did not rape the nun, he was arrested following contradictions in his statements, circumstantial evidence, statements of witnesses, and the nun’s statement under Section 164 of the CrPC.

In June, a Kerala nun in her late 40s had complained that Bishop Mulakkal had raped her several times between 2014 and 2016 at the mission house in Kottayam district.

The survivor nun said she had to approach the police as the church authorities did not act even after repeated complaints.