'Ploy to divert attention from failures in J'khand': JMM prez on Art 370 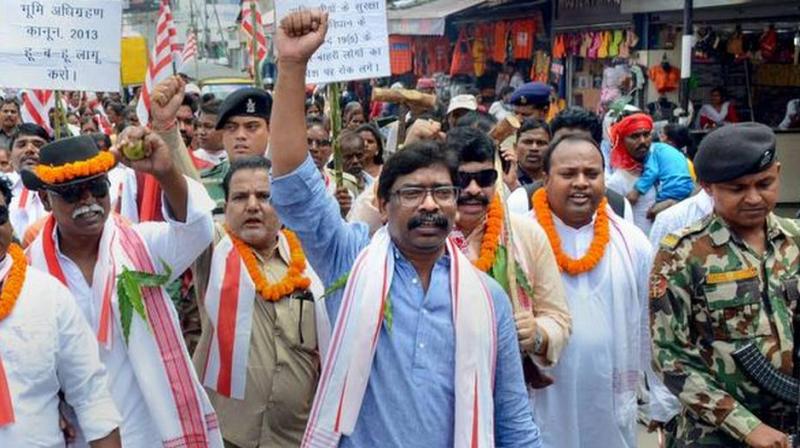 The former Jharkhand Chief Minister’s sharp attack comes days after Prime Minister Narendra Modi and BJP president Amit Shah referred to Article 370 while listing the achievements of the NDA 2.0 government in their public addresses in the poll-bound State. (Photo: PTI)

Kota: The BJP is raising the issue of abrogation of certain provisions of Article 370 in the run up to the Jharkhand Assembly polls as a “ploy” to divert people’s attention from “monumental failures” of the Raghubar Das Government, Jharkhand Mukti Morcha (JMM) working president Hemant Soren alleged on Sunday.

The former Jharkhand Chief Minister’s sharp attack comes days after Prime Minister Narendra Modi and BJP president Amit Shah referred to Article 370 while listing the achievements of the NDA 2.0 government in their public addresses in the poll-bound State.

Soren said the JMM will raise people’s issues in the campaign and promised that if voted to power, his Government will ensure 75% reservation for the youth of Jharkhand in private jobs.

In an interview to PTI, he said if JMM forms the government, it will ensure five lakh jobs within one year, unemployment allowance to those who are jobless, reserve government tender up to Rs 25 crore for people from the State, implement 50 pc reservation for women in jobs and 27 pc reservation for Other Backward Classes (OBCs).

Asked about the BJP raising the Article 370 issue in Jammu and Kashmir, Mr. Soren said a government which fails to address economic and social crises and key issues that affect everyday lives of citizens, resorts to “creating sharp polarisation in the society”.

“Lightning doesn’t strike a place twice and similarly the BJP cannot fool the people all the time. Raising the issue of Article 370 during state assembly polls campaign is nothing but the BJP’s ploy to divert people’s attention from its monumental failures in governance in Jharkhand,” he said.

Prime Minister Narendra Modi might have been successful in securing an NDA victory based on the post-Pulwama and Balakot nationalistic fervour, but the people of Jharkhand have had enough of this “apathetic” state government and are waiting to throw it out in the upcoming assembly polls, he claimed.

“For this purpose, we are willing to coordinate with all like minded parties to collectively fight the BJP and its divisive policies. JMM was instrumental in the fight to achieve Jharkhand as a separate state, and if necessary, will again engage in the struggle to ensure Jharkhand shines bright on the nation’s map,” he said.

“The entire Opposition has already had a meeting and once I get over with the ongoing ‘Badlav Yatra’, I will sit again with all party leaders,” he added.

JMM, Congress, Jharkhand Vikas Morcha (Prajatantrik) and Rashtriya Janata Dal had contested the Lok Sabha polls in alliance earlier this year, but managed to win just two out of the 14 seats.

He said conversations are ongoing to firm up the Opposition alliance and there was still time to finalise its shape.

Soren, who has been touring the State as part of his ‘Badlav Yatra’ and connecting with the masses, claimed there was a lot of anger among the people of the state as the Raghubar Das Government had failed to meet their aspirations.

“Farmers and farm labourers have committed suicide, families have been destroyed, anganwadi workers are on an indefinite fast, para teachers were on a statewide strike and the police brutally lathi charged them as if they were deadly criminals, youth not getting jobs are ending their lives and the state government is giving government jobs to people from outside Jharkhand,” he alleged.